Of fallacy, reality and winning the west 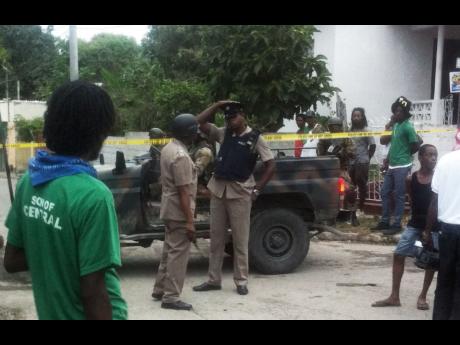 Adrian Frater
Security personnel manning a cordon in Flanker, St James, following the shooting up of a JLP motorcade on nomination day.

With Nomination day 2016 now history, all eyes will be on February 25, when the nation will go to the polls to elect a new government. As is customary, the 15 constituencies in western Jamaica will be firmly under the microscope.

While renowned political historian Shalman Scott has declared it a fallacy, there is a popular notion in local political circles that, "wherever the west goes, the rest of Jamaica follows.

"The view that whoever wins the west will be victorious at the national polls is a lie that has been repeated so often that people begin to treat it as if it was eternal truth," Scott recently told Western Focus. "In 2007, the JLP won the elections, but the PNP won the west. So that, by itself, is an indicator that the Government can be formed without winning the majority of seats in the west."

Whether or not the popular notion is true, the most recent trends in Trelawny, St James, Hanover, Westmoreland and St Elizabeth will be closely watched on election night as the nation awaits the outcome of the elections.

In the 2011 general election, which the PNP won by a 42-to-21 seat count, the Portia Simpson Miller-led party swept the west, taking home 12 of the region's 16 parliamentary seats, enjoying clean sweeps in Westmoreland and Hanover.

Historically, Westmoreland is viewed as a 'safe' PNP territory. In fact, except for 1980 when the JLP swept the entire island with their emphatic 51-9 win, the PNP has consistently been winning Westmoreland comfortably by 3-0 margins.

While St James was considered PNP turf back in the days of stalwarts such as Howard Cooke and Francis Tulloch, things and times have definitely changed, especially since 2002. In the 2002 and 2007 general elections, the JLP had comfortable back-to-back 3-1 victories. However, in 2011, the PNP returned to the helm with a close 3-2 win, taking the newly created Central St James seat in the mix.

Hanover has had a long history of sharing its two constituencies, with the west solidly PNP and the east, more frequently JLP than PNP. However, since 2007 when the PNP inserted political heavyweight Dr D.K. Duncan in the east, the party has had full control of the entire parish.

Like Hanover, the dynamics in Trelawny have been most interesting, with the north being a strong PNP territory and the south chopping and changing from time to time. In the 2011 elections, the north stayed PNP with Patrick Atkinson easily defeating Dennis Meadows. However, in the south, the JLP held sway with Marisa Dalrymple-Philbert winning the seat by almost 2,000 votes.

With the 2016 campaign now on in earnest, it will be interesting to see where the west will go and who will follow.