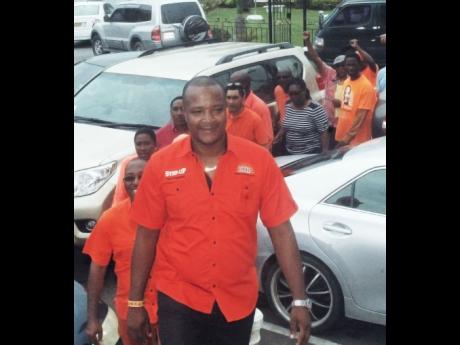 Victor Wright, the PNP candidate for north Trelawny, marching cinfidently into the nomination centre in Falmouth on Nomination Day. 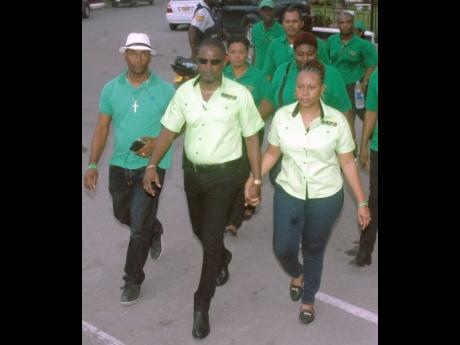 Had it not been for the shooting up of a Jamaica Labour Party (JLP) motorcade in Flanker, St James, nomination day 2016 would have been a joyful experience in western Jamaica based on fun, frolic and intrigue, which unfolded elsewhere.

While the guns were barking in Flanker, killing one man and injuring several others, just 20 minutes away, across the Trelawny border, orange-clad People's National Party (PNP) and their green-clad JLP counterparts were dancing up a storm in Water Square, Falmouth.

The North Trelawny PNP camp, which was rocked by internal strife over recent months, appears to have found unity with jubilant comrades lining up behind agronomist Victor Wright, who was only days earlier drafted in to replace the somewhat polarising J.P. White, who many Comrades had vowed never to support.

"We are not phased by the bravado of the JLP's candidate," said Wright's campaign manager, Mark Campbell. "A united PNP will never lose North Trelawny."

However, for the JLP's Dennis Meadows, who lost twice in election bids for the North Trelawny seat to Dr Patrick Harris in 2007 and to Patrick Atkinson in 2011 he is confident the third time will be the charm for him.

"I am now a son of the soil here in North Trelawny ... I have married to a Trelawny woman and I now live in the constituency," said Meadows. "In addition, I have learnt from my past experiences and I have every confidence that the third time will be the charm for me."

In East Westmoreland, independent candidate Haile Mika'el evoked memories of National Hero Paul Bogle famous 45-mile walk from Stony Gut in St Thomas to Spanish Town in St Catherine in 1865 to seek audience with Governor Eyre, when he walked the 25 miles from his home in Belmont to hand in his nomination papers in Darliston.

"The Right Excellent Paul Bogle walked for our rights, so why can't I do the same," said Mika'el, whose five-hour walk took him through communities such as Mt Airy, Robins River, Beeston Spring, Bog, Hopeton and Chantilly. "If I am elected, I am prepared to walk for the rights of the people."

While there might be very little similarity between representational politics and cricket, the popular local pastime was very much in the air on nomination day. Former West Indies fast-bowler Daren Powell will be seeking to bowl over the JLP's J.C. Hutchinson in North East St Elizabeth on a PNP ticket, while over in West Westmoreland, former Jamaica batsman Dixieth Palmer plans to hit the PNP Wykeham McNeill for six, batting for the JLP.

While Flanker was giving St James a black eye, the nomadic Ras Astor Black, who has contested by-elections all over the island, evoked memories of the biblical prodigal son, returning to his South St James birthplace to challenge the PNP's strongman Derrick Kellier, a six-time winner of the constituency.

"I am a son of South St James ... I was born up in Point," said Black. "I believe I am the right man to end Kellier's reign ... I know the area and I know the needs of the people. I am back to get them proper representation."