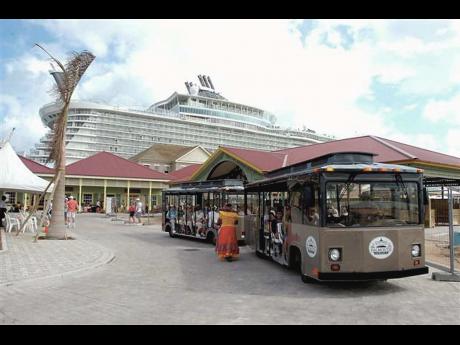 x
The Falmouth cruise pier on its first day of business in March 2011.

Just a week after critical stakeholders painted a damning picture of Falmouth at a Gleaner Editor's Forum, the Ministry of Tourism has announced that a whopping J$1.1 billion is to be spent to complete ongoing projects in the Trelawny parish capital.

In making the announcement during a recent visit to Falmouth, Tourism Minister Edmund Bartlett said the development is part of an ambitious plan to move Falmouth from a one million passenger per year cruise shipping destination to a 1.5 million destination within a year.

"What I am here today primarily to do is to ensure that there is the buy-in of Falmouth ... the stakeholders, the mayor, the MP (member of parliament), the Chamber of Commerce, the police, and the average man in the street," said Bartlett.

However, if the lack of enthusiasm and the general frustration, which came out at the recent Gleaner Editor's Forum, which was attended by the town's mayor, Garth Wilkinson, MP Victor Wright, and Trelawny Custos Paul Muschett is anything to go by, Bartlett's expected "buy-in" could prove quite dicey.

"There does not seem to be a cohesive development plan for Falmouth, and the Falmouthians (residents) and the persons who want to buy into Falmouth do not really know in which direction the town is going," Custos Muschett told The Gleaner's forum.

According to the stakeholders at the forum, which also included Delroy Christie, president of the Trelawny Chamber of Commerce, and Paula Barrett, the Social Development Commission's parish manager for Trelawny, Falmouth has been stymied by a failure to follow through with the various development plans or by having the plans modified to the detriment of the town.

"I have seen the development plan for Falmouth, but the problem is that the plan is not being implemented, and there does not seem to be the will to implement it," said Christie. "Our biggest problem is lack of implementation."

With distressing issues such as badly congested streets, no parking facilities, poor garbage collection, and a workforce which is ill-equipped for jobs in the hospitality sector, it is difficult to see Falmouth, with all its potential, becoming the major economic hub it is projected to become by 2030.

"Falmouth's development, in my view, has been the victim of weak leadership over the years." said Dennis Meadows, the Jamaica Labour Party's (JLP) caretaker for North Trelawny, in expressing his disappointment with the slow pace of development in the town. "There is a deficit of leadership in Falmouth at all levels ... and it must be addressed."

While the cruise ship pier has been churning out impressive arrival figures, Meadows say it is not the catalyst for the development of Falmouth, which it was projected to become, based on the limited impact it has been having on the lives of the residents of Falmouth.

While Bartlett's plan to create an artisan village in Falmouth might be good news for the persons in the art and craft sector, there is still doubt as to whether, without a supporting marquee attraction, Falmouth will ever be able to prevent cruise passengers from just 'busing' off to attractions in St Ann and St James when they come to Falmouth.

For former president of the Trelawny Chamber of Commerce, businessman Dennis Seivwright, the promised statue of the parish's most revered son, track and field star Usain Bolt, could be the answer to the need for a marquee attraction.

"A statue of Bolt would be a major attraction, but we continue to joke with our potential and have done nothing, while other countries have capitalised on his fame," said Seivwright, in renewing his call for a statue of Bolt to be erected in Falmouth.

While the J$1.1 billion, which is to come from the Tourism Enhancement Fund, might raise hopes of Falmouth finally getting on track, based on the previous $230 million, which was spent without any noticeable trickle-down effect on the residents of Falmouth, it will be interesting to see what will unfold going forward.