We are investing in Trelawny - Rhoden 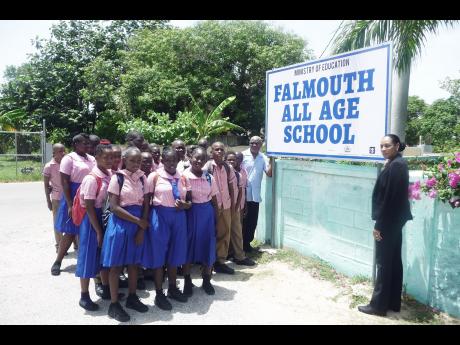 Shellion Rhoden, the business manager of Falmouth Jamaica Land Company Limited (FJLCL), operators of the Falmouth cruise ship pier, says contrary to the views of several prominent stakeholders in the resort town, her organisation is playing its part in the development of the wider community.

According to her, since the pier came into operation in 2011, the FJLCL, without much fanfare, has been involved in several charitable activities to include the annual Christmas treat put on by the mayor of Falmouth, the donation of books to the Trelawny Parish Library and schools in the parish; and the offering of scholarships to gifted students.

"We feel that we are doing as much as we can, and we will continue to do so ... we will always be investing in the country ... we are not going anywhere," said Rhoden, in a recent interview with Western Focus. "We have made a significant investment in the country, and we want to give back to Trelawny."

Within recent times, stakeholders such as Falmouth's mayor, Councillor Garth Wilkinson; and the Jamaica Labour Party's (JLP) caretaker for North Trelawny, Dennis Meadows, have both expressed disappointment with the lack of tangible cruise shipping benefits to the town.

Two years ago, seemingly frustrated that cruise shipping was not delivering on the lofty promises that were made when it was first conceptualised, Wilkinson stated that, except for possibly craft vendors, the spin-offs to Falmouth were all but inconsequential.

"We must admit that apart from our craft vendors and a few other locations, none of our businesses have changed to cater for our visitors," Wilkinson. "We have wasted a lot of time, energy and money in the past, but it has got us nowhere; it is more than time that we change the way we do business."

In speaking to the general disappointment of the residents of the Falmouth, who have long cherished hopes that the operations at the cruise pier would have had a transformational effect on their lives, Meadows said the situation has led to much disenchantment.

"The cruise ship pier was seen as a catalyst for development in Falmouth; it is yet to realise the promise of the much-heralded plans of improving the lives of the people," said Meadows. "There is now a level of disenchantment that is pervading the psyche of the people as a consequence of that disappointment."

However, with gestures such as its recent $100,350 scholarship donation to former Hague Primary student Tyreece Terry, who passed his Grade Six Achievement Test to attend Munro College; and the $242,867.50 awarded to Roscheika Spencer, a modern language student at Sam Sharpe Teachers' College, Rhoden thinks the FJLCL, which is owned by Royal Caribbean Cruises Limited, is making a positive contribution to Trelawny.

"Royal Caribbean is an investor in Jamaica, and we will be here for a long time to come ... . We built the port, and we are obviously not going anywhere," said Rhoden. "We want to ensure that the community is happy and is benefiting from our existence in Jamaica."