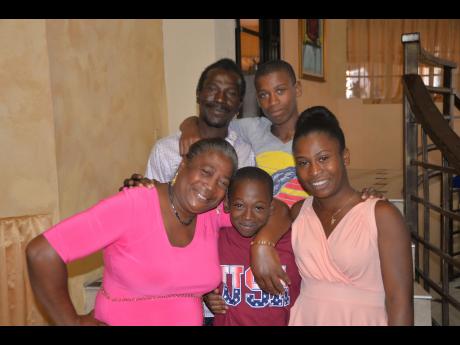 Okoye Henry
Members of the Chester Castle family in Hanover, who were assisted by the Children of Faith and UNICEF programme to address long-term truancy among children in Western Jamaica. At back, from left are father, George Thomas, and George Thomas Jr (In front, from left) Mother, Octavia Smith, Roshane Thomas and Georgia Thomas.

A major initiative that has been staged in two western parishes by Children of Faith (COF) and UNICEF in 2014, to get chronically absent children to attend school consistently, has been reaping success.

The programme was undertaken at the school, community and individual levels in Chester Castle, Mount Ward and Mt Peto in Hanover, as well as in Bethel Town in Westmoreland.

At last Wednesday's UNICEF-COF stakeholders' workshop which was held in Montego Bay, it was understood that before the intervention, data showed that the children referred in these communities had an 80.9 per cent absence rate as they were not in attendance between four and five days from school each week.

"Since the intervention, 87.5 per cent of the children referred attend school four to five days per week," said executive director of Children of Faith, Gloria Meredith.

Meredith said approximately 177 children were now being assisted with back-to-school supplies, while three young adults are currently undergoing skills training at a HEART training centre, with another nine set for enrolment. She said it was alarming that so many youngsters have not been attending school on a regular basis, mainly due to their parents' financial constraints.

"For some community members, education comes at the cost of survival. These communities need support, especially if this way of thinking is to change for the children," said Meredith.

She said the programme was able to provide guidance and support through counselling for families, income-generating projects, establishing support groups, and even street-side meetings in the communities.

Octavia Smith, one of the mothers from Chester Castle, who recently got aid to generate her own income, was lauded for her efforts as she is now able to send her three children to school regularly. Her 12-year-old son, Roshane Thomas, a seventh grader at Cambridge High School, was lauded for his vast improvement and performance at school since he began regular attendance.

"I feel good because before I was not working, but the father was but it was sometimes on an on-and-off basis. Then Children of Faith came in and gave me some dishwashing liquid, a gallon of bleach, washing soap. I sell it and buy back, and because of that, I was able to send my children to school," explained Smith.