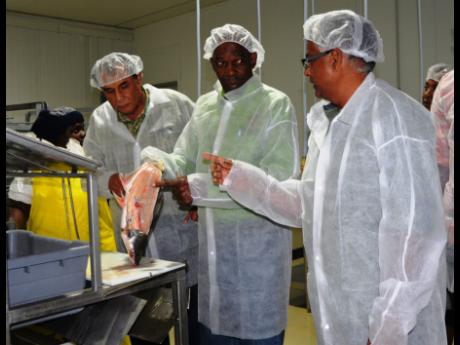 Fish-farming company Algix Jamaica is leading a resurgence of aquaculture in Jamaica and is exploring a plan to get most of the more than 2,000 acres of deserted fish ponds in Jamaica back in operation to expand its production capacity as it prepares to tap into the lucrative global fish market.

Algix is the first company to produce the basa (pangasius hypophthalmus) fish in Jamaica, which is bred along with the tilapia (red hybrid) in approximately 120 acres of water at its 300 acres Barton Isle, St Elizabeth, property.

About 60 per cent of the ponds are dominated by tilapia production, with about 50,000 to 70,000 kilograms produced for the domestic market monthly. However, this is expected to be reversed as soon as Algix begins to export its new product, which, at full production, should realise about 150,000 kilograms monthly in the short term.

According to Raldane Reynolds, procurement and logistics manager at Algix, the company is targeting the Indian, Brazilian, European, and North American markets and will be contracting fish farmers to increase their production.

"We have set our sights on these markets. The potential is endless. the global fish market is big-money business," he said during his presentation at the launch of their new product recently. "Basa has become so popular. the last time we checked in 2013, it was the sixth most consumed fish on the planet.

"India alone imports 5,000 tonnes monthly, or US$13 million, of this product, and our neighbours, the United States, imports US$1 billion worth of basa annually," he continued. "The basa didn't just bring variety to our dinner tables, but also a new economic opportunity for our farmers."

Added Reynolds: "The Pangasius has significantly lower production costs, requires no aeration whatsoever, and allows farmers to increase harvest yields by 5,000 per cent more (than the tilapia), to be precise, without having to dig additional ponds."

Reynolds continued: "With full government support, Jamaica stands to be the envy of the global basa industry. We have a product the entire world wants, and we will be the best at producing it."

The Reynolds family-led firm acquired Aquaculture Jamaica in 2014 and has so far pumped approximately US$300 million into its operations. Some 90 persons are currently employed there.

A native of Asia, the basa is one of the most consumed fish globally and was being imported to Jamaica for decades until Algix farm, led by managing director and aquaculturist Maurice Reynolds, decided to explore the possibility of breeding it locally.

During his address, state minister in the Ministry of Agriculture and Fisheries JC Hutchinson challenged fish farmers to see aquaculture as big business.

"No longer can we see fish breeding as just a hobby. this is big business as is being demonstrated by Algix," he said.