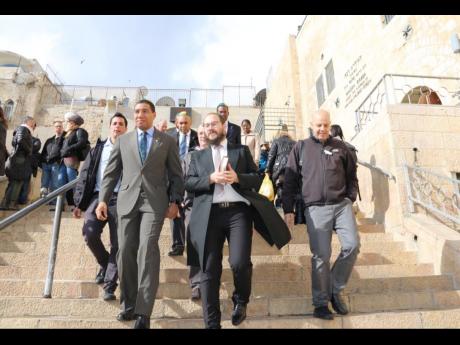 The Jewish community in Jamaica says that it is prepared to join in the fight against crime by bringing youth closer to God through the introduction of its doctrine to schools across the country.

Rabbi Yaakov Raskin, co-director of Chabad of Jamaica, said the community, which numbers approximately 350 islandwide, is appalled by the senseless bloodshed and is convinced that education, coupled with a greater connection to God, will help to solve the problem.

"With God willing, we are reaching out to schools across Jamaica with the intent to start giving lectures and presentations about the seven Noahide, or Universal, Laws," explained Raskin, who is the only rabbi in Jamaica.

He said that the Noahide Laws teach "no bloodshed, no idolatry, no Lechery, no robbery, no blasphemy; the setting up of courts of justice; and prohibits the consumption of any limb or flesh taken from animals"

"Jamaica is all about one love, and that is why we want to instill that in the local Jamaican community to bring back that spirit of positivity. Just because we don't agree with someone doesn't mean we should get into a fight and try to kill them. We as a people must learn to work out our differences," said the rabbi.

"Every country has dark moments and needs some light, so I would not say Jamaica has a unique problem, but the country definitely could use more positivity. And every human with the right school and education can change the world," he added.

Raskin owns and operates a kosher restaurant, Chabad Jamaica, in Ironshore, Montego Bay, which caters to Jewish locals and Jamaicans. He said that since moving to Jamaica with his family three years ago, he, in partnership with the local Jewish community and overseas partners, has been instrumental in carrying out charity projects for needy youth.

"We came to Jamaica to bring love to the Jews living here, the 200,000 Jewish visitors that come here a year, as well as to the local Jamaicans," said Raskin, who, a few weeks ago, joined Prime Minister Andrew Holness on a trip to Israel.