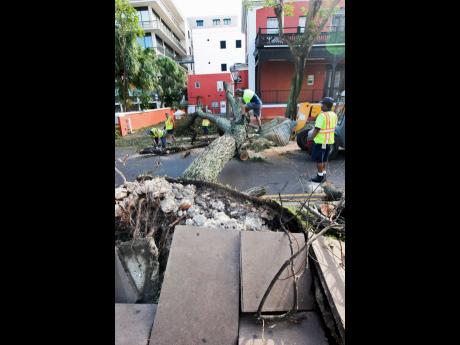 Workers use a chainsaw to remove an uprooted tree from a street in downtown Hamilton, Bermuda after hurricane Gonzalo hit the island last Friday.

The storm's centre crossed over Bermuda last Friday night and its winds and heavy surf continued to whip at the island yesterday morning as Gonzalo quickly moved northward over the Atlantic on a track that could take it just off the shore of Newfoundland in Canada.

"This was a dangerous hurricane, but Bermuda today is dealing with property damage, blocked roads and a loss of electricity, all things that can be replaced and restored," said Premier Michael Dunkley. "Thankfully, there has been no loss of life."

The hospital, which suffered a damaged roof, was still operating, and bulldozers were clearing trees from roads as crews worked to restore power to some 28,000 homes.

A causeway that links the eastern end of Bermuda to the main part of the island remained closed as the government awaited an inspection by structural engineers.

Police Commissioner Michael DeSilva said many roads were impassable and urged people to stay home, warning on the island's Emergency Broadcast Station that motorists would be turned back.

Gonzalo approached Bermuda as a Category 3 storm then weakened to Category 2 strength just before coming ashore with sustained winds of 110 mph (175 kph).