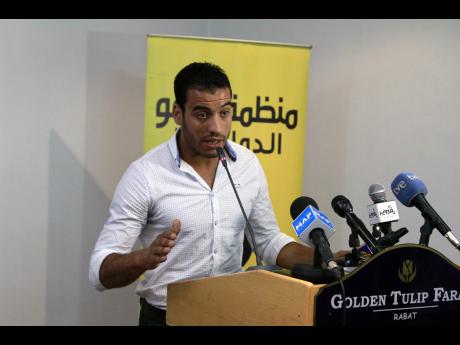 AP
Abderrazak Jkaou describes to reporters how he was tortured and beaten by police for demonstrating, in Rabat, Morocco, yesterday.

Moroccan authorities still use torture widely despite a ban on the practice, the Amnesty International rights group said in a report yesterday documenting the abuse.

Despite the ban and statements against torture by King Mohammed VI, law-enforcement authorities still abuse protesters, rape detainees with objects and beat confessions out of suspects, it said, detailing 173 cases of abuse and torture since 2010.

"For real and tangible reform, we need more than just words because there is a huge gap between theory and practice," Amnesty's Middle East and North Africa director Philip Luther told journalists.

The Moroccan government rejected the findings, calling into question the credibility of Amnesty's sources.

Morocco is a popular vacation destination for Europeans and a close US ally. It ratified the United Nations convention against torture 21 years ago and is presenting itself as a stable country respecting human rights.

The report recommended that lawyers be present during interrogations, allegations of torture be investigated and those reporting abuses be protected, all measures present in the penal code but rarely implemented.

Abderrazak Jkaou, a 26-year-old former student activist arrested in 2012, said he was beaten unconscious by police before he was detained at the police station, where the beatings continued.

Jkaou said he has pictures of the marks the poundings left on his body.

"They practised the worst kinds of torture," he told The Associated Press. "They handcuffed and they beat me."

Those accusing the police of torture are now being prosecuted for slander and defamation to discourage them from speaking out, the report said.

Since 2014, eight people have been charged for allegedly giving false allegations of torture, including activist Ouafa Charaf, who was sentenced to a year in prison in August for accusing the police of torture. Her sentence was doubled in October when she appealed.