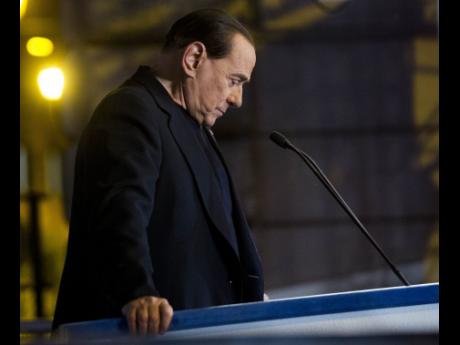 A court in Naples yesterday convicted former Italian Premier Silvio Berlusconi of corruption charges, accusing him of bribing a senator to weaken the government of his political arch-rival.

The court also gave the media mogul a three-year prison sentence, but since the statute of limitations is expiring soon, Berlusconi will not do prison time. In Italy, sentences are served only after two levels of appeals trials, which take years, are exhausted.

Berlusconi was not in court for the verdict. "It's a verdict that we contend is shockingly unfair and unjustified," a Berlusconi lawyer, Niccolo Ghedini, told reporters.

The court also banned Berlusconi from serving in public office for five years, but, again, that punishment will not apply due to the statute of limitations expiring this fall.

Prosecutors had alleged a senator was bribed to defect from a coalition supporting then-Premier Romano Prodi, the only politician who defeated Berlusconi in elections for the premiership.

During the trial, which began in February 2014, prosecutors alleged that the senator, from a tiny centre-left party backing Prodi, was paid €3 million between 2006 and 2008 to switch loyalties to Berlusconi's centre-right coalition, then Parliament's biggest opposition force.

Other judicial woes could loom for Berlusconi, whose Forza Italia party is in disarray after a string of electoral losses.

Milan prosecutors are investigating whether Berlusconi or his aides paid off witnesses or potential witnesses in the sex case, which stemmed from so-called "bunga-bunga" parties with young starlets and aspiring show girls at soirees at the billionaire's private residences.