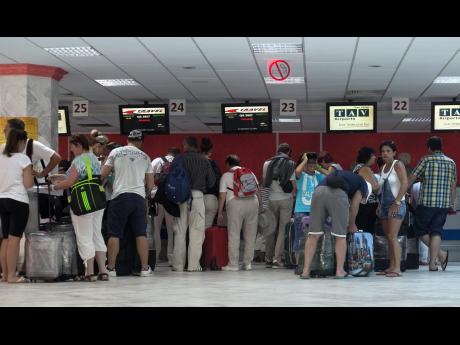 AP
Tourists line up at Monastir airport as they prepare to leave Tunisia, a day after a shooting attack which took place in the coastal town of Sousse on June 27.

The British government yesterday told all United Kingdom (UK) tourists to leave Tunisia because a terrorist attack is "highly likely" and the North African country's government has not done enough to enhance security.

The Foreign Office advised against all but essential travel to Tunisia, a popular holiday destination for Britons. It said British tourists on package holidays should contact their travel agents, who would arrange flights to take them home.

Thirty-eight tourists, 30 of them British, were killed on June 26 when a gunman stormed the Tunisian beach resort of Sousse. In March, 22 people died in an attack at the National Bardo Museum outside Tunis.

"While we do not have any information suggesting a specific or imminent threat, since the attack in Sousse, the intelligence and threat picture has developed considerably, leading us to the view that a further terrorist attack is highly likely," British Foreign Secretary Philip Hammond said.

In a statement, his office said the travel advice had been changed because "we do not believe the mitigation measures in place provide adequate protection for British tourists in Tunisia".

On Saturday, more than a week after the Sousse attack, Tunisian authorities announced a state of emergency and enacted new security measures such as sending more than 1,300 security forces to patrol hotels, beaches and other tourist sites.

The UK decision amounts to a major new blow to Tunisia's tourist industry. Hundreds of thousands of British tourists visit Tunisia each year. Many Britons left after the Sousse attack, but some 3,000 are still in Tunisia.