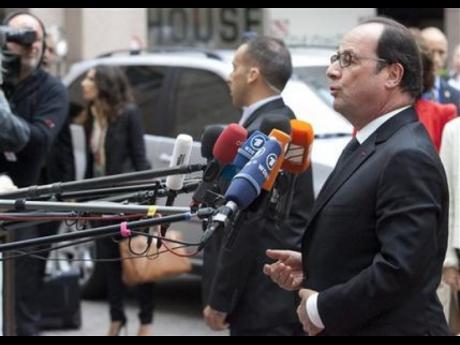 AP photo
French President Francois Hollande (right) speaks with the media as he arrives for a meeting of eurozone heads of state at the EU Council building in Brussels on Sunday, July 12, 2015.

BRUSSELS (AP) -- Greece's prime minister and skeptical European leaders sought desperately Sunday to overcome their fundamental differences - aiming to produce a tentative agreement to stave off an immediate financial collapse in Greece that would reverberate across the continent.

Tsipras came into the summit looking for a compromise deal.

"We owe that to the peoples of Europe who want Europe united and not divided," he said. "We can reach an agreement tonight if all parties want it."

Greece has asked Europe's bailout fund for a 53.5 billion-euro ($59.5 billion) 3-year financial package but many officials in Brussels say the figure will have to be much higher and insist on tough Greek austerity measures. This would be Greece's third bailout in five years.

Greece desperately needs help to avoid a financial collapse. The economy is in freefall and the country faces big debt repayments in the coming weeks. Greek banks have been shuttered for the best part of two weeks and daily withdrawals from ATMs have been limited to a paltry 60 euros ($67). The banks, according to some accounts, have barely enough cash to last through the week.

Chancellor Angela Merkel, however, insisted that Germany would not sway from its stance that Greece needs to do much more to get any help just to save its position in the 19-nation euro zone.

"There will not an agreement at all costs," she said, coming into Sunday's summit meeting. "Nerves are tense, but it has to be clear that the advantages outweigh the disadvantages."

Highlighting the differences within the creditors' camp, French President Francois Hollande insisted it was vital to keep Greece in the currency club and avoid a so-called "Grexit".

If Greece had to leave the euro currency "it's Europe that would go backward," Hollande said. "And that I do not want."

France is considered Greece's best friend and even helped Tsipras prepare the reform proposals that are his lifeline to getting international aid over the coming days or weeks.

"We have lost so much time we cannot afford to lose time anymore," Italian Finance Minister Pier Carlo Padoan said as he arrived for talks Sunday. "We continue to work to establish the conditions to start negotiations, which is the real target. ... It is not about closing a deal."

Yet in a sign that a dramatic Greek exit from the euro would not happen Sunday, a full summit of the European Union's 28 leaders was cancelled. Instead, the euro zone's 19 leaders, including Tsipras, were meeting Sunday afternoon to assess the outcome of the finance ministers' talks and plot a further way ahead.

Malcolm Barr, an analyst at JP Morgan, said the cancellation of the broader EU summit "suggests a clear decision against a third package for Greece is not likely at this point."

In an early morning tweet, Donald Tusk, who chairs meetings of European leaders, said the eurozone summit would start in mid-afternoon "and last until we conclude talks" on Greece.

The leaders are firmly focused on "plan A" that involves Greece living up to its obligations and staying in the euro, a European official who is close to the negotiations said. He spoke on condition of anonymity because he was not authorized to speak publicly.

The official added the hope is that there is enough progress to give the "green light" to the European Central Bank to turn up the emergency liquidity assistance it provides to Greek banks in the next day or two.

Finance ministers broke up talks Saturday after more than eight hours with Greece's creditors unconvinced that the Tsipras government could be trusted to reform the Greek economy. They want iron-clad proof that it can deliver on promises to implement tough austerity and reform measures in return for billions more in rescue money - including making pension changes and sales tax increases.

"I would like to see the Greek government take concrete actions starting tomorrow in parliament to implement measures that are needed," Padoan said Sunday. "And then to rebuild trust that would allow concrete negotiations to move forward."

Tsipras cleared one hurdle Saturday when lawmakers in the Greek parliament overwhelmingly backed a package of economic reforms and further austerity measures, in hopes that would convince European creditors to back the third bailout.

The euro zone ministers have to give their blessing to Greece's bailout request to the European Stability Mechanism. Traditionally, eurozone ministers agree by mutual consensus, though in exceptional circumstances a unanimous vote may not be needed.

Greece has received two previous bailouts totaling 240 billion euros ($268 billion) in return for deep spending cuts, tax increases and reforms from successive governments. Although the country's annual budget deficit has come down dramatically, Greece's debt burden has increased as the economy has shrunk by a quarter.

The Greek government has made getting some form of debt relief a priority and hopes that a comprehensive solution will involve European creditors at least agreeing to delayed repayments or lower interest rates.

Greek debt stands at around 320 billion euros ($357 billion) - a staggering 180 percent or so of the country's annual GDP. Few economists think that debt will ever fully repaid. Last week, the International Monetary Fund said a restructuring of debt was necessary for Greece.