GREEK CRISIS: Greece yields to some demands; Temporary euro exit up for discussion 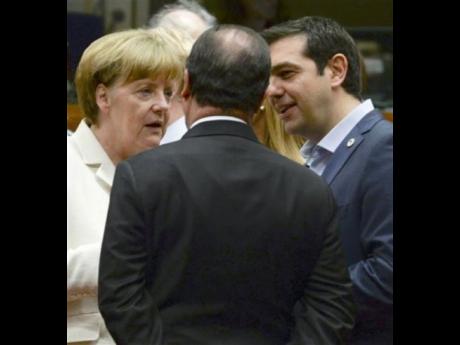 (AP) - The Greek government appears to have accepted a raft of demands from European creditors that it had previously condemned.

Among a series of proposals that made it into a draft document sent to eurozone leaders, Greece has accepted that officials from the creditor institutions will have some sort of base in Athens.

It remained unclear whether that ability "to work on the ground" will be similar to the hands-on oversight the country underwent after the country's initial bailout in 2010. Many in Greece hated what they considered foreign meddling in their affairs.

Elsewhere in the eurogroup document obtained by The Associated Press, Greece has agreed to carry out "ambitious" pension and market reforms, and "significantly" scale up its privatization program.

According to the document, the Greek government has agreed to legislate a first set of measures by Wednesday.

Further, a temporary Greek exit from the euro is up for potential discussion at this evening's summit of the eurozone's 19 leaders.

At the conclusion of a 4-page draft document of proposals put to leaders and obtained by The Associated Press, euro zone finance ministers said Greece should be offered "swift negotiations on a time-out from the euro area with possible debt restructuring" if no bailout deal is agreed.

The measure of a potential temporary Greek exit was bracketed in the document, meaning that it was passed to leaders for their consideration.

In the document that shows that Greece has moved a long way to meeting creditors' demands, the so-called eurogroup said the country may need between 82-86 billion euros ($91-96 billion) in financing.

Meantime, Russia says it is considering supplying energy directly to the government of Greece, where doubts have been raised about the ability of Greek state-run companies to pay for imports of oil and natural gas.

The state-run companies were ordered to put their reserves into a central account, which the state has been using to cover expenses such as salaries and pensions as liquidity ran out in the country.

Russian Energy Minister Alexander Novak said Sunday that Russia intended to support the recovery of the Greek economy by widening cooperation in the energy sector. In connection with this, he said Russia was studying options for direct supplies to the Greek government and hoped to reach an agreement in the next few weeks.

Greece imports the vast majority of its gas from Russia.