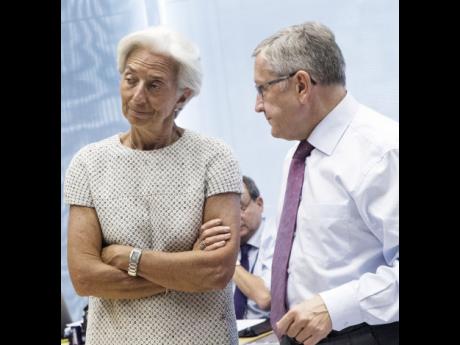 AP
Managing Director of the International Monetary Fund Christine Lagarde, discusses the latest Greek proposal with with chair of the European Financial Stability Facility Klaus Regling during a meeting of eurozone finance ministers in Brussels yesterday.

Greece's finance minister spent yesterday in talks with sceptical creditors, trying to persuade them that the Greek government can be trusted to deliver on its reform promises in exchange for a financial rescue securing the country's future in the euro.

After convincing the Greek parliament in the early hours of yesterday to back a harsh austerity package to stave off financial collapse, the Greek government is facing a difficult task getting its European creditors to support its three-year bailout request.

Over and over, finance ministers and top officials of the eurozone said the same thing as they arrived for a key meeting on Greece's bailout proposals we don't fully trust you.

Greece, they said, needed to do a lot more than just publish a 13-page plan of reform commitments before they could sign off on another multibillion-euro bailout deal that would keep the country afloat and prevent its exit from the euro.

A European official at the talks said creditors want "more specific and binding commitments" from the Greek government.

"We are still a long way out, both on the issue of content, as on the tougher issue of trust," said Jeroen Dijsselbloem, the eurozone's top official, on his arrival at the meeting.

Greece is running out of time to convince its creditors. A summit today of European Union leaders could be its last chance to prevent the collapse of the banking sector and an inevitable exit from the euro currency.

Greece's banks have been shuttered for the best part of two weeks, and daily withdrawals from ATMs have been limited to a paltry 60 euros. The economy is in free fall, and the country faces a raft of big-debt repayments.