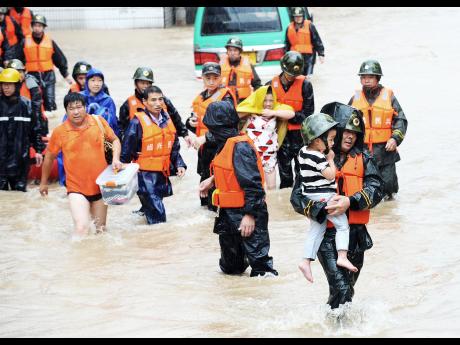 Typhoon Chan-hom slammed ashore with winds of up to 160 kilometres (100 miles) per hour.

It dumped more than 100 millimetres (four inches) of rain between late Friday and yesterday about a month's average in less than 24 hours.

No deaths or injuries were reported up to late yesterday.

Police were out barring people from trying to drive, at the urging of local officials.

The national weather service said earlier the typhoon might be the strongest to strike China since the communist government took power in 1949. It initially was deemed a super-typhoon, but was downgraded at midday yesterday to a strong typhoon, and was weakening further as it moved inland.

Heavy downpour was reported in some areas, including the village of Lai'ao, which recorded more than 400 millimetres (16 inches) of rain.

More than 100 trains and 600 flights were cancelled, and passenger ferries also suspended service.

Earlier, Chan-hom caused 20 injuries as it moved over islands in southern Japan.