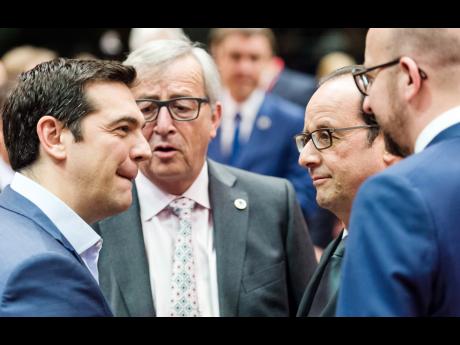 AP
Greek Prime Minister Alexis Tsipras (left) speaks with (from left) European Commission President Jean-Claude Juncker, French President François Hollande and Belgian Prime Minister Charles Michel during a meeting of Eurozone heads of state at the European Union Council building in Brussels yesterday. Sceptical European creditors raced to narrow differences both among themselves and with Athens, aiming to come up with a tentative agreement to stave off an immediate financial collapse in Greece that would reverberate across the continent.

Greece yesterday moved closer to a desperately needed deal with European creditors which would stave off immediate financial collapse and the country's potential exit from the euro but impose more hardship on its people.

Facing a self-imposed Sunday deadline, the Eurozone's top official, Jeroen Dijsselbloem, said the sides have "come a long way" after two days of talks among finance ministers, but that the final effort on "some big issues" would be handled by Eurozone leaders in a summit which was expected to go into the night.

Underscoring the optimism despite the often fundamental differences among the leaders, Italian Prime Minister Matteo Renzi said "we are very close".

The broad outline of a deal appeared to consist of a long series commitments from Greek Prime Minister Alexis Tsipras to push through much of a drastic austerity programme within days, while the 18 other Eurozone leaders would commit to start talks on a new bailout programme.

In a four-page draft proposal put to Eurozone leaders and obtained by The Associated Press, language up for discussion spoke of a potential "time out from the euro area" for Greece if no agreement could be found.

It highlighted the increasing frustration with Greece during five months of fruitless talks. On Sunday, doubts on the Greek government's commitment to implement tough measures continued.

"The most important currency has been lost: that is trust and reliability," said German Chancellor Angela Merkel, reflecting on five months of tortuous negotiations with Athens.

In the draft document, Greece committed itself to pushing a first set of measures through parliament by Wednesday. Despite the stinging conditions on pension, market and privatisation reforms, Tsipras insisted his government was ready to clinch a deal.

"We owe that to the peoples of Europe who want Europe united and not divided," he said. "We can reach an agreement tonight if all parties want it."

Greece has asked Europe's bailout fund for a €53.5-billion (US$59.5 billion) three-year financial package, but many officials in Brussels say the figure will have to be much higher and insist on tough Greek austerity measures. This would be Greece's third bailout in five years.

Greece desperately needs help to avoid a financial collapse. The economy is in freefall and the country faces big debt repayments in the coming weeks. Greek banks have been shuttered for the best part of two weeks and daily withdrawals from ATMs have been limited to a paltry €60 (US$67).

The banks, according to some accounts, have barely enough cash to last through the week.

Merkel, however, insisted that Germany would not sway from its stance that Greece needs to do much more to get any help just to save its position in the 19-nation Eurozone.

"There will not be an agreement at all costs," she said, coming into Sunday's summit meeting. "Nerves are tense."

Highlighting the differences within the creditors' camp, French President FranÁois Hollande insisted it was vital to keep Greece in the currency club and avoid a so-called 'Grexit'.

If Greece had to leave the euro currency "it's Europe that would go backward," Hollande said. "And that I do not want."

France is considered Greece's closest ally and even helped Tsipras prepare the reform proposals that were a minimum requirement for getting fresh talks.

Finnish Finance Minister Alexander Stubb, one of Greece's most outspoken critics, said a package of proposals sent to the leaders involved three key elements, including the Greek parliament's passing of a series of unspecified laws by Wednesday.

If these conditions are met, then talks with Europe's bailout fund can proceed, Stubb said.

"We have surely taken a good leap forward," Stubb said.