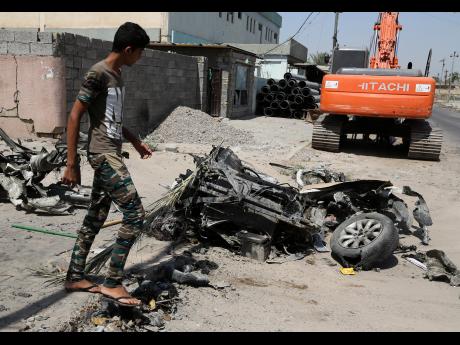 AP
A man inspects the scene of an explosion in a busy commercial area in Baghdad, Iraq yesterday

The spokesman for the Joint Operations Command, Brig. Gen. Yahya Rasool, said in a televised statement that the operation started at dawn and that government forces were being backed by Shiite and Sunni pro-government fighters. Rasool did not say whether the US-led international coalition was taking part.

In a brief statement, Iraqi Prime Minister Haider al-Abadi vowed to "take revenge from Daesh criminals on the battlefield ... and their cowardly crimes against unarmed civilians will only increase our determination to chase them and to expel them from the land of Iraq."

The Islamic State group, also known by the Arabic acronym Daesh, seized large parts of Anbar in early 2014 and captured Ramadi in May. Iraqi forces, which had been making steady progress against the extremists in recent months with the help of the air campaign, scored a major victory in recapturing Saddam Hussein's hometown of Tikrit in April.

During the past few weeks, the troops have been moving to cut the militants' supply routes and to surround and isolate Ramadi and Fallujah.