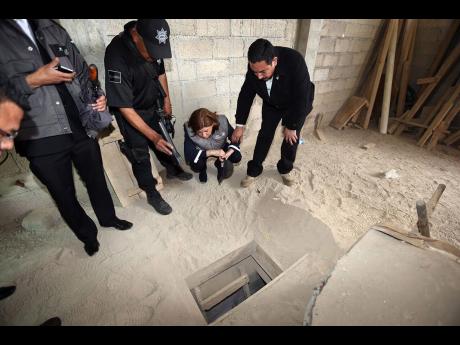 The kind of tunnel that led Mexico's most powerful drug lord to freedom would have been more than a year in planning. The digging would have caused noise. The entrance would have to be in a place beyond the view of security cameras at Mexico's toughest prison.

As authorities hunted Monday for any sign of Mexico's most powerful drug lord, it was clear that Joaquin 'El Chapo' Guzman's escape must have involved inside help on a grand scale.

Interior Secretary Miguel Angel Osorio Chong said as much Monday night. He announced that three prison officials had been fired, including Valentin Cardenas, director of the facility known as Altiplano, a maximum security prison 55 miles (90 kilometres) west of Mexico City.

"They had something or a lot to do with what happened, and that's why we made that decision," Osorio Chong said.

Still, he did not say who exactly is suspected of aiding the escape. Nor did he talk about rooting out the kind of corruption that led to the escape.

The prison has the same high-security standards as those in the United States and Canada, he said, and Guzman was given extra surveillance, including a tracking bracelet, although it worked only inside the prison.

Osorio Chong said the 1.5-kilometre (one-mile) tunnel had been dug 19 metres (about 62 feet) below the surface and called it a "high-tech" breach of the prison's extensive security measures, including 750 cameras and 26 security filters.

The Mexican government announced that it is offering a 60 million-peso ($3.8 million) reward for Guzman's recapture. An Interpol alert was sent to 10 countries and at least 49 people have been questioned by the government's organised-crime unit, including more than 30 prison employees.

A tunnel of such sophistication - with lights, air venting, and a customised motorcycle rigged up on a rail line - would normally take 18 months to two years to complete, said Jim Dinkins, former head of Immigration and Customs Enforcement's Homeland Security Investigations.

"When it's for the boss, you probably put that on high speed," he said.