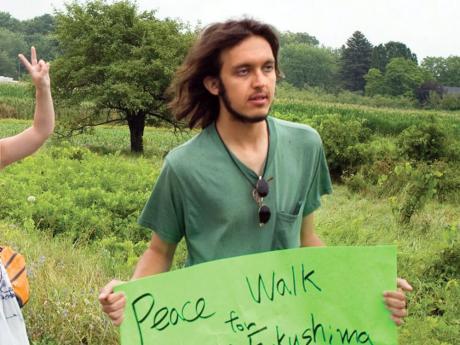 AP
In this July 26, 2012 photo provided by the Northumberland News, Alexander Ciccolo participates in a peace walk through Brighton, Ontario.

The son of a Boston police captain has been accused of plotting to detonate pressure-cooker bombs at an unidentified university and to broadcast the killings of students live online to show his support for the Islamic State group, authorities said.

Alexander Ciccolo's father alerted authorities last fall that his son had a long history of mental illness and was talking about joining the Islamic State group, according to two law enforcement officials who spoke to The Associated Press on condition of anonymity because they were not authorised to release details.

Ciccolo, 23, of Adams, was charged in a criminal complaint unsealed Monday with illegal possession of a firearm for receiving four guns on July 4, from a person cooperating with the Western Massachusetts Joint Terrorism Task Force. Ciccolo was barred from having a gun because of a drunken-driving conviction.

His father, Robert Ciccolo, is a 27-year veteran of the Boston police force.

In court documents, the FBI said Ciccolo, also known as Abu Ali al Amriki, had talked with the cooperating witness in recorded conversations in June about his plans to commit acts inspired by the Islamic State group.

Ciccolo initially talked about killing civilians, police officers and members of the U.S. military but later said he wanted instead to attack a state university outside Massachusetts because more people would be there, according to the FBI. The FBI said the attack would include killings of students, broadcast live over the Internet.