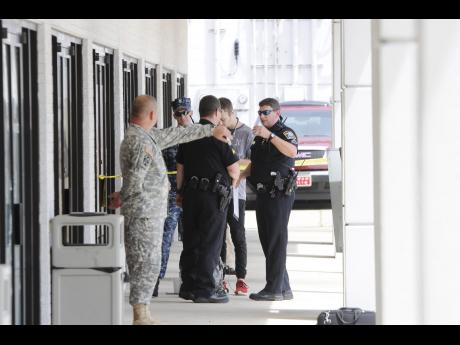 A gunman unleashed a barrage of gunfire at two military facilities yesterday in Tennessee, killing at least four Marines and wounding a soldier and a police officer, officials said. The shooter also was killed.

"Today was a nightmare for the city of Chattanooga," Mayor Andy Berke said. "As a city, we will respond to this with every available resource that we have."

United States (US) Attorney Bill Killian said officials were treating the attacks as an "act of domestic terrorism", though Federal Bureau of Investigation Special Agent in Charge Ed Reinhold said authorities were still investigating a motive. The first shooting happened around 10:45 a.m.; the attacks were over within a half hour.

Berke said five people died in all, including the gunman. A police officer was shot in the ankle and others were wounded, he said.

Two US officials, speaking on condition of anonymity to discuss an ongoing investigation, told The Associated Press four US Marines were among the dead.

A Marine recruiter was treated at a hospital for a gunshot wound to the leg, the Marine Corps said on its Facebook page.

"Lives have been lost from some faithful people who have been serving our country, and I think I join all Tennesseans in being both sickened and saddened by this," Governor Bill Haslam said.

The shootings began at a recruiting centre on Old Lee Highway in Chattanooga where five branches of the military all have adjoining offices. A gunshot rang out around 10:30 or 10:45 a.m., said Sgt 1st Class Robert Dodge, 36, the centre leader for US Army recruiting.

"Shortly after that, just a few seconds, the shooter began shooting more rounds. We realised it was an actual shooting," he said.

He and his colleagues then got on the ground and barricaded themselves in a safe place. Dodge estimated there were 30 to 50 shots fired.