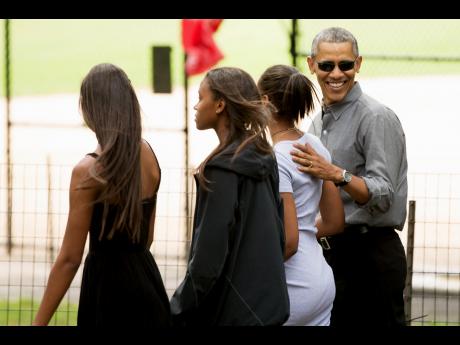 It's inevitable: At some point, teenage kids just are not that into their parents anymore.

President Barack Obama, parent to two teenage daughters, set out to combat that trend by hanging out with his girls in New York for the weekend.

The trio, plus some of the girls' friends, seemed intent on packing a lot into their 24 hours together in the city.

The visitors finally emerged about 11:30 a.m., as the sun broke through, and they headed to Central Park, joined by the president's sister, Maya Soetoro-Ng and her husband, Konrad Ng.

They strolled along the park's pathways, bringing pedicabs, bikers, skaters, horse-drawn carriages, and walkers to a screeching halt as people whipped out cell phones to capture the moment.

A New York weekend was Obama's idea. He often laments that his girls are less interested in spending time with him now that they are older. But the concept gets a little complicated, of course, when dad is the president.

Obama's every move requires massive security precautions that tie the bustling streets of New York in knots, and he can attract throngs of onlookers in an instant.

But after more than six and a half years in the White House fishbowl, Malia, 17, and Sasha, 14, have adjusted to all the attention and they know how to carry on.

"They're hitting the age where they still love me, but they think I'm completely boring. And so they'll come in, pat me on the head, talk to me for 10 minutes, and then they're gone all weekend," the president said in an interview last month. "They break my heart."