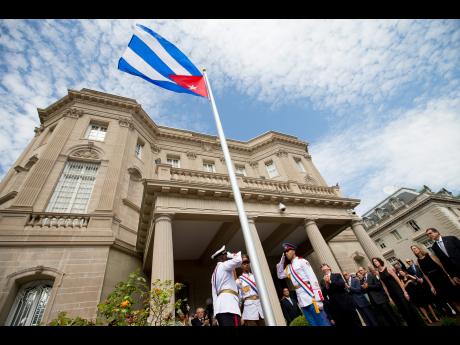 Cuba's blue, red and white-starred flag was hoisted yesterday at the country's embassy in Washington, signaling the start of a new post-Cold War era in US-Cuba relations.

In sweltering heat and humidity, Cuban Foreign Minister Bruno Rodriguez presided over the flag-raising ceremony hours after full diplomatic relations with the United States were restored at the stroke of midnight when an agreement to resume normal ties took effect. Rodriguez later met with Secretary of State John Kerry, becoming the first Cuban foreign minister to set foot in the State Department since 1958.

"We celebrate this day - July 20 - as a time to start repairing what has been broken and opening what for too long has been closed," Kerry said in Spanish at a joint news conference with Rodriguez. Kerry said he would visit Cuba on August 14 to preside over a flag-raising ceremony at the US Embassy in Havana.

Despite the historic events, there remain issues that continue to vex the US-Cuba relationship.

"This milestone does not signify an end to the many differences that still separate our governments," Kerry said. "But it does reflect the reality that the Cold War ended long ago and that the interests of both countries are better served by engagement than by estrangement."

Echoing comments he made at the embassy ceremony, Rodriguez complained anew about the U.S. continuing to retain the Guantanamo Bay Naval Base in Cuba where the American military prison holds terror suspects. And, he repeated demands for the U.S. to end the 53-year-old embargo on Cuba and stay out of Cuba's internal affairs.

In Havana, meanwhile, a carnival atmosphere reigned around the new U.S. Embassy overlooking Havana's Malecon seaside promenade. By midmorning, the Cuban government had pulled back several of the eight or so security guards who had stood watch.

A pair of officers stood on each corner around the building, smiling and wishing "buenos dias" to passers-by instead of casting stony glares. Curious Cubans clustered around the forest of flagpoles at the front of the embassy, snapping photos as U.S. tourists posed for selfies in front of the building.

In Washington, some 500 guests, including a 30-member delegation of diplomatic, cultural and other leaders from the Caribbean nation, attended the Cuban ceremony at the stately 16th Street mansion that has been operating as an interests section under the auspices of the Swiss Embassy.

Outside the building, the activist group Code Pink held pink umbrellas that spelled out "Amigos." There were several protesters, including one whose shirt was covered in red paint who was removed from the scene by police.