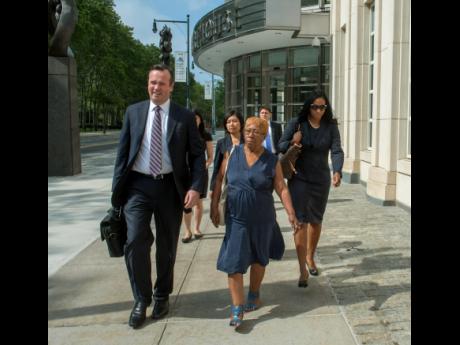 Former FIFA Vice-President Jeffrey Webb no longer has time on his hands.

The indicted soccer official is providing 11 luxury watches to secure the US$10 million bond that provided his release from custody along with his wife's wedding ring, three opulent cars and 10 properties.

According to an order filed yesterday setting the conditions for release, Webb secured the bond with five Rolex watches plus a Cartier Roadster, Hublot, Breitling, Panerai, Royal Oak Offshore and Luminor Marina.

The government noted that the Hublot has not yet been turned over to the FBI, and must be provided by August 2

His wife's diamond wedding ring also is security along with a diamond bracelet, diamond and pearl necklace, one pair of pearl earrings, one pair of long-hanging diamond earrings, and Rolex and Hublot watches. Her partnership equity interest in a company, whose name was redacted, also was used.

In addition, bond was secured by ten properties.

Jeffrey Webb, a citizen of the Cayman Islands who has a home in Georgia, was arrested in Switzerland in May and extradited to the United States. He pleaded not guilty on Saturday to racketeering and bribery charges, part of an indictment of nine soccer officials and five marketing executives alleging a US$150 million bribery and kickback scheme. Four others have pleaded guilty.

As a condition of his bond, he must reside within 20 miles of US District Court in Brooklyn, and is paying for electronic monitoring and home detention. He agreed not to associate with FIFA, CONCACAF, South America's governing body or any of his co-defendants and co-conspirators. Webb and his wife also agreed to surrender all of their passports.

Following the indictment, he was provisionally suspended by FIFA and CONCACAF, the regional governing body of North and Central America and the Caribbean. Webb had been president of CONCACAF since 2012.