50 Cent testifies about his finances in sex-tape lawsuit 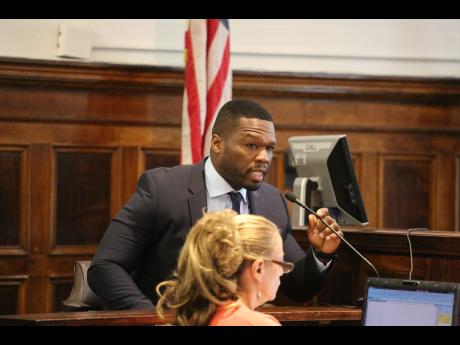 AP
Curtis Jackson, aka 50 Cent, appears in Manhattan Supreme Court yesterday in New York to testify in a lawsuit about a sex tape he allegedly posted online.

Rapper 50 Cent, ranked by Forbes as one of hip hop's five richest artistes, downplayed his wealth yesterday as he testified in court about his finances, business deals, and the media attention surrounding his recent bankruptcy filing.

The multiplatinum-selling artiste, born Curtis Jackson III, appeared in Manhattan State Supreme Court in a proceeding to decide possible additional punitive damages in an invasion-of-privacy lawsuit. A jury has already ordered him to pay $5 million in damages in a lawsuit brought by a woman who said he didn't have her permission when he released a sex tape she made with a boyfriend.

Questioned by an attorney for the woman, Lastonia Leviston, the musician-actor denied owning many luxury items - including expensive cars and flashy jewelry - saying he rents, borrows, and leases instead.

"It's a borrowed piece of jewellery from the jeweller," he told Leviston's lawyer, Philip Freidin, when asked about a photo of a 65-karat ring he posted on his Instagram account.

Leviston sued the Get Rich or Die Tryin' rapper after a 13-minute video appeared online showing a wig-wearing 50 Cent crudely narrating and taunting his rival, Rick Ross, who was not in the video, but who has a daughter with Leviston. At the time the video surfaced, Ross and 50 Cent were trading barbs via video, lyrics, and interviews.

Jackson has said Leviston's then-boyfriend gave him the 2008 tape, and that while he didn't actually post it online, the boyfriend said she didn't mind if he did.