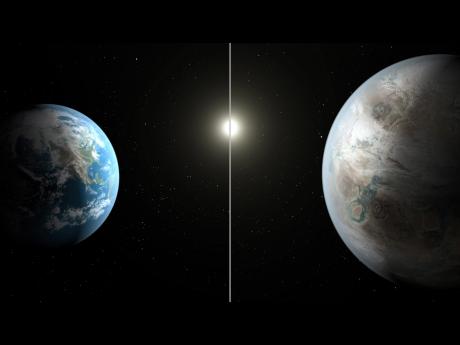 AP
This artist's rendering made available by NASA on Thursday, July 23, 2015 shows a comparison between the Earth, left, and the planet Kepler-452b.

Scientists have identified a "close cousin" to Earth that's orbiting a sunlike star and might harbour life.

The researchers announced their discovery yesterday based on observations from NASA's Kepler space telescope.

"It is the closest thing that we have to another place that somebody else might call home," said Jon Jenkins, the lead data analyst from NASA's Ames Research Center in California.

This older, bigger cousin to Earth is called Kepler-452b. What makes this planet remarkable is that it orbits its star at about the same distance that Earth orbits the sun. What's more, its home star looks to be similar to our sun.

Based on what scientists know today, Jenkins added, "This is the closest thing we have to another Earth-sun twin system."

John Grunsfeld, NASA's science mission chief, said the exoplanet system "as far as we can tell, is a pretty good close cousin to the Earth and our sun." The planet itself is "the closest twin, so to speak, to Earth 2.0" yet found in the Kepler data.

"This is about the closest so far," Grunsfeld said, "and I really emphasise the 'so far'.