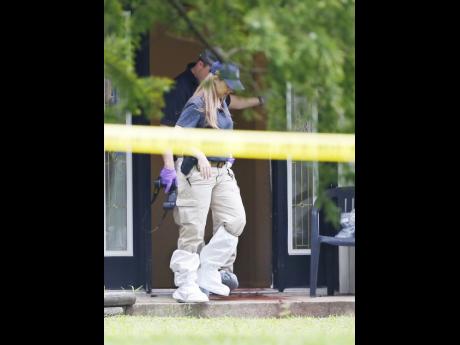 AP
An investigator walks around blood on the doorstep of a house in Broken Arrow, Okla., yesterday, where five family members were discovered stabbed to death. Two teenagers were taken into custody.

Police responding to a silent 911 call found five people stabbed to death at a well-kept suburban Tulsa home, then detained two teenage male relatives of the victims after a police dog tracked them down in nearby woods.

Investigators, some wearing white booties to protect their shoes, stepped gingerly around a pool of blood near the front of the home yesterday morning. Other officers erected black tarps and blue tarps to shield the home from reporters and neighbours while they gathered clues. The bodies remained at the home into late morning as police waited on a medical examiner.

"I've been here 19 years and I don't know if we've had more than three homicides in a year. I don't think we've had a single incident of this magnitude," said Broken Arrow Police Cpl Leon Calhoun, the department spokesman.

According to Calhoun, officers responding to the 911 call could not enter the house through the front door, but heard moaning and found another way inside. They dragged a 13-year-old girl who survived the attack on to the front lawn, then found two other victims and, unsure if they were alive or dead but fearing a killer remained on the premises, took them outside, where the bodies remained at midday Thursday.

Three other bodies were inside the house.

Calhoun said police were struggling to notify next of kin because so many relatives were involved somehow.

Broken Arrow Police Sgt. Thomas Cooper said nine people were linked to the family home the five dead, which included adults and juveniles; the 16- and 18-year-old relatives in custody; the 13-year-old girl in serious but stable condition with stab wounds; and a 2-year-old girl who was unharmed. The toddler was transferred to state custody, Cooper said.