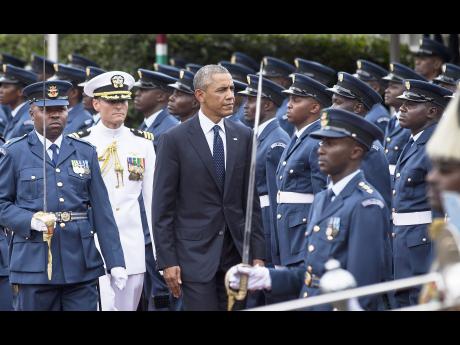 United States (US) President Barack Obama yesterday nudged African nations to treat gays and lesbians equally under the law, a position that remains unpopular through much of the continent.

But Obama's Kenyan counterpart, Uhuru Kenyatta, responded by calling the matter a "non-issue" for his country.

Obama tackled the sensitive matter on his first full day in Kenya, the country of his father's birth. He drew on his own background as an African-American, noting the slavery and segregation of the US past and saying he is "painfully aware of the history when people are treated differently under the law".

"That's the path whereby freedoms begin to erode and bad things happen," Obama added during a joint news conference with Kenyatta. "When a government gets in the habit of treating people differently, those habits can spread."

Kenyatta was unmoved, saying gay rights "is not really an issue on the foremost mind of Kenyans. And that is a fact".

A number of Kenyan politicians and religious leaders had warned Obama in outspoken terms that any overtures on gay rights would not be welcomed in Kenya, where gay sex is punishable by up to 14 years in prison. The Kenyan gay community also complains of sometimes violent harassment.