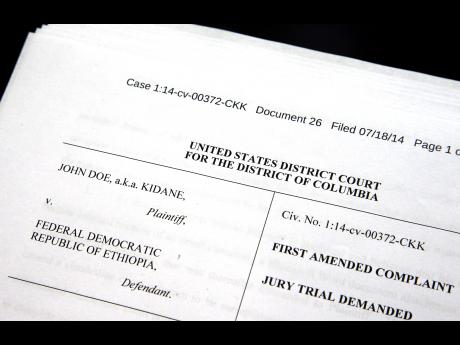 AP
Documents are photographed in Washington last Saturday, in a unique lawsuit challenging whether Ethiopia can spy on an American by turning his computer into a giant recording device.

As President Barack Obama faces pressure to discuss human rights in his first official visit to Ethiopia last weekend, a unique lawsuit back home is challenging whether the African country can spy on an American by turning his computer into a giant recording device.

The federal case alleges that Ethiopian government agents gobbled up months of a Maryland man's Skype calls and his family's Internet activities. But the man, born in Ethiopia and now a US citizen, is not wanted for a crime. Instead, he helps out a political opposition group outlawed in his home country.

The alleged intrusion was investigated after the software left behind bread crumbs, underscoring a larger pattern: the use of commercial hacking software by foreign governments, sometimes with poor human-rights records, to electronically snoop on their adversaries.

White House press secretary Josh Earnest said this past week that the US "regularly conveyed to Ethiopia's leadership our concerns in such areas as press freedom, transparency, space for civil society and the political opposition".

Human Rights Watch and other organisations urged Obama, who arrived in Ethiopia on Sunday after visiting Kenya, to put the "pressing human-rights concerns" in visits to Ethiopia and Kenya "at the forefront of your discussions."

Ethiopia has sought hacking software from at least two separate companies, court records and emails show. The legality of such technology in other countries - and a US federal judge's pending decision on whether

the Maryland man's lawsuit can proceed - could raise

The Obama administration has had to deal with other countries hacking into American computers and compromising private data. The Justice Department last year charged five Chinese military hackers for breaching major corporations' systems and siphoning off business secrets.

Lawyers for the Maryland plaintiff, who goes by Kidane in court documents to protect him from retaliation, say software called FinSpy made secret audio recordings of his Skype calls, copied portions of his emails and logged Web searches done by his son for schoolwork.

A federal judge in Washington asked the US government this month if it wanted to weigh in on the case. Ethiopia wants it tossed, saying governments have immunity when conducting such activities. The EFF says the case is important for showing warrantless wiretapping is illegal and can be the basis of a US lawsuit, regardless of who engages in it.