Obama: Kenya at 'crossroads' between peril and promise 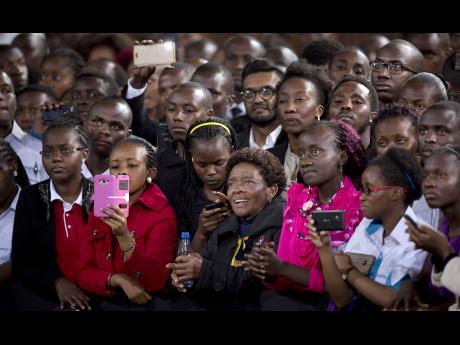 AP
Members of the audience at the front of the crowd listen to President Barack Obama deliver a speech at the Safaricom Indoor Arena in the Kasarani area of Nairobi, Kenya yesterday.

Declaring Kenya at a "crossroads" between promise and peril, President Barack Obama on Sunday pressed the nation of his father's birth to root out corruption, treat women and minorities as equal citizens, and take responsibility for its future.

Closing his historic visit with an address to the Kenyan people, Obama traced the arc of the country's evolution from colonialism to independence, as well as his own family's history there. Obama said young Kenyans are no longer constrained by the limited options of his grandfather, a cook for the country's former British rulers, or his father, who left to seek an education in America.

Obama's visit, his first as president, captivated a country that views him as a local son. Thick crowds lined the roadways to watch the presidential motorcade speed through the city on Sunday, some climbing on rooftops to get a better view. The audience inside the arena chanted his name as he finished his remarks.

The president left Kenya Sunday afternoon, pausing longer than normal atop the stairs of Air Force One to wave to the crowd, a huge grin on his face. He arrived two hours later in Addis Ababa, the Ethiopian capital, where he met with diplomats at the US Embassy in the evening.

Obama has written emotionally about his first visit to Kenya as a young man nearly 30 years ago, and he recounted many of those same memories in his remarks yesterday. He spoke about the battered Volkswagen his sister drove, meeting his brothers for the first time, and the airport employee who recognised his last name.

The president barely knew his father, who died in 1982 after leaving the US to return to Kenya. However, Obama has numerous family members in the country, including his half-sister, Auma Obama, who introduced her brother on Sunday.