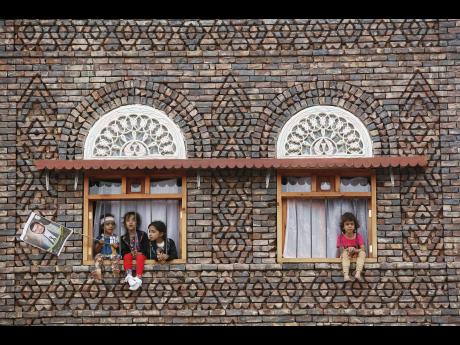 AP
Children sit behind the windows of their house as they look at a rally against Saudi-led airstrikes by Shiite rebels known as Houthis in Sanaa, Yemen.

Security officials and field commanders of forces allied with the coalition said 15 of their fighters were killed in two separate coalition airstrikes in the province of Lahj. The accidental strikes against allied forces wounded more than 40 fighters, they say, adding that the death toll is expected to rise.

The deadly strikes happened near the strategic military base of al-Anad, which is held by the rebels and was also hit by coalition planes Monday. The coalition also struck north of the port city of Aden.

Airstrikes had been halted for hours, but ground fighting erupted in multiple provinces within minutes of the start of the unilateral cease-fire late Sunday.

The rebels, known as Houthis, said in a statement that they fired missiles across the border at a Saudi military position in the kingdom's Jazan region. The Saudi-owned Al-Hadath news channel said Saudi forces "responded" to Houthi shelling in Jazan, without elaborating.

Fierce clashes also broke out in the nearby town of Sabr, which is on a key supply route. Officials aligned with pro-government fighters say they have regained control of the centre of the town and were trying to advance into northern neighbourhoods. Witnesses who fled Sabr Monday morning say corpses of fighters lay in the street next to destroyed military vehicles.

Officials and witnesses said there were sporadic clashes in Yemen's central Marib province. In Taiz, mortar shells fired in the centre of the city killed four civilians, security and medical officials said.

The humanitarian pause was intended to help allow humanitarian aid to be delivered to ease the suffering of civilians in the Arab world's poorest country.