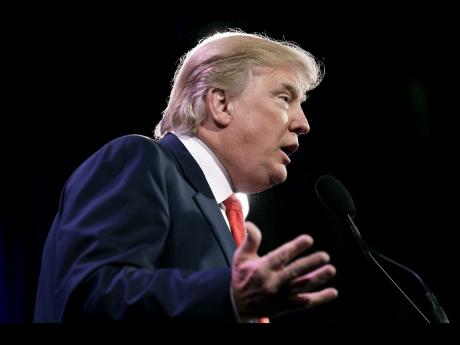 Since the beginning of June, Donald Trump has received more coverage on the broadcast network evening newscasts than all of the other candidates for president combined, with his estranged former partners at NBC giving him the most attention.

The statistics offered by Andrew Tyndall, a consultant who studies the content of evening newscasts, is one snapshot of how Trump has seized the media's attention, to the detriment of his rivals.

The ABC, CBS and NBC evening newscasts spent 114 minutes on campaign coverage from the beginning of June through the end of last week, and Trump was the focus of 60 of them. The closest competitor was Jeb Bush with 15 minutes. Tyndall counted five minutes for Democratic front-runner Hillary Clinton, although that didn't include stories about her government email while secretary of state.

NBC has devoted 35 minutes to Trump coverage, including his interview with Katy Tur. CBS had 16 minutes, Tyndall said. ABC's 'World News Tonight' had eight minutes of Trump coverage, six of them last week.

Trump had a longtime relationship with NBC as host of The Apprentice though the network has cut ties with him on the show after he announced his candidacy. The network also angered him during the past month by cancelling its broadcast of the Miss Universe pageant, owned by Trump, because of the candidate's comments on Mexican immigration.

That corporate quarrel hasn't seemed to affect NBC News' coverage of Trump's campaign, Tyndall said. In general, 'Nightly News' has paid more on-air attention to the presidential campaign this summer than either 'World News Tonight' or the 'CBS Evening News'," he said.

"They haven't gone out of their way to attack him," Tyndall said. "They just cover him more."

NBC declined to talk publicly about their campaign coverage.