Wing part turns up as solid clue in hunt for MH370 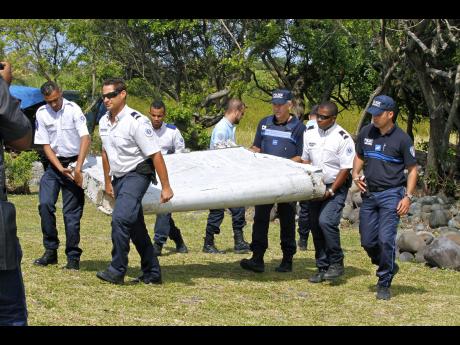 AP
AP In this photo dated Wednesday, July 29, 2015, French police officers carry a piece of debris from a plane in Saint-Andre, Reunion Island. Air safety investigators, one of them a Boeing investigator, have identified the component as a "flaperon" from the trailing edge of a Boeing 777 wing, a U.S. official said. Flight 370, which disappeared March 8, 2014, with 239 people on board, is the only 777 known to be missing.

A sea-crusted wing part washed up on an island in the western Indian Ocean may be the first trace of Malaysia Airlines Flight 370 since it vanished nearly a year and a half ago, and a tragic but finally solid clue to one of aviation's most perplexing and expensive mysteries.

Malaysia's prime minister said yesterday the debris found on the French island of Reunion would be sent for investigation to the French city of Toulouse, hub of the European aviation industry.

"We have had many false alarms before, but for the sake of the families who have lost loved ones, and suffered such heartbreaking uncertainty, I pray that we will find out the truth so that they may have closure and peace," Najib Razak said on his personal blog.

Air safety investigators - one of them a Boeing investigator - have identified the component as a "flaperon" from the trailing edge of a Boeing 777 wing, a US official said. Flight 370, which disappeared March 8, 2014, with 239 people on board, is the only 777 known to be missing.

The piece could help investigators figure out how the plane crashed, but whether it will help search crews pinpoint the rest of the wreckage is unclear, given the complexity of the currents in the southern Indian Ocean and the time that has elapsed since the plane disappeared.

"It's the first real evidence that there is a possibility that a part of the aircraft may have been found," said Australian Transport Minister Warren Truss, whose country is leading the search for the plane in a remote patch of ocean far off Australia's west coast. "It's too early to make that judgment, but clearly, we are treating this as a major lead."

Flight 370 had been travelling from Kuala Lumpur to Beijing, but investigators believe, based on satellite data, that the plane turned south into the Indian Ocean after vanishing from radar. If the wing part is from the Malaysian plane, it would bolster that theory and put to rest others that it travelled north or landed somewhere after being hijacked.