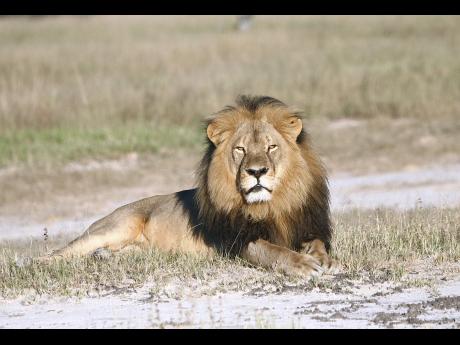 AP
In this undated photo provided by the Wildlife Conservation Research Unit, Cecil the lion rests in Hwange National Park, in Hwange, Zimbabwe.

Another American illegally killed a lion with a bow and arrow in Zimbabwe several months ago, authorities said yesterday amid an international outcry over the US hunter accused of illegally killing a well-known lion named Cecil in early July.

Two illegal lion hunts also were recorded last year in the country, said Geoffrey Matipano, conservation director for the wildlife authority. He did not provide details on those cases.

A Zimbabwean landowner, Headman Sibanda, was arrested in the Seski case and is assisting police, the wildlife authority said.

Messages left by The Associated Press at Seski's home, and with an answering service for his medical practice, were not immediately returned.

"When hunters come into the country, they fill a document stating their personal details, the amount they have paid for the hunt, the number of animals to be hunted, the species to be hunted, and the area and period where that hunt is supposed to take place," she said.

"The American conducted his hunt in an area where lion hunting is outlawed. The landowner who helped him with the hunt also did not have a have a quota for lion hunting."

Zimbabwean authorities earlier said they will seek the extradition of Minnesota dentist Walter James Palmer, alleging he did not have authorisation to kill the lion named Cecil a month ago. The lion was lured out of Hwange park and first wounded with a bow and arrow before being tracked down and shot, according to conservationists in Zimbabwe. Palmer has said he relied on his professional guides to ensure his hunt was legal.

Two Zimbabwean citizens were arrested and face charges in the case in which Palmer has been implicated.

On Saturday, Zimbabwe's wildlife authority said it had suspended the hunting of lions, leopards and elephants in the Hwange area.

Bow and arrow hunts were also suspended and can only be approved by the head of the wildlife authority.