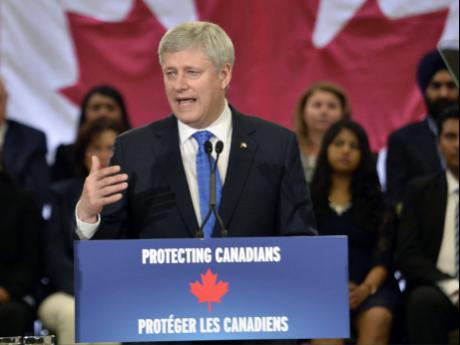 Canadian Prime Minister Stephen Harper dissolved Parliament yesterday in a visit to the governor-general, who serves as Canada's formal but mostly ceremonial head of state, and set the vote for October 19.

Harper and his Conservative party hope to earn a fourth term after almost a decade in power.

Analysts say the election is a toss-up, and Harper faces an uphill battle to form another majority government. If Harper wins, he would become the first prime minister since 1908 to win four consecutive elections.

Harper has managed to nudge a traditionally centre-left country to the right since coming to power in 2006. He has gradually lowered sales and corporate taxes, avoided climate change legislation, supported the oil industry against the environmental lobby, increased military spending, and backed Israel's right-wing government. He has deliberately avoided sweeping policy changes that could derail his government.

Harper, 56, said the election is about keeping Canadians safe from terrorist attacks and the economy strong. A collapse in oil prices, a major export, has hurt the Canadian economy.

He said now is not the time for inexperience and "political correctness," referring to the opposition leftist New Democrat party.

"A national election is not a popularity contest," Harper said. "It's a genuine choice between practical, serious, real-world experience and a dangerous approach that has failed before and is failing in other countries."

Analysts say a minority government in the 338-seat Parliament is likely no matter what party wins the most seats in Parliament. That would mean the winning party would have a shaky hold on power and need to rely on another party to pass new legislation.