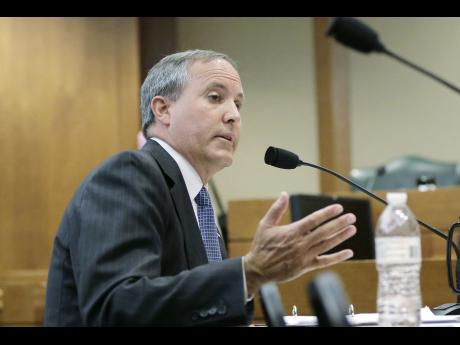 Texas Attorney General Ken Paxton was booked yesterday on securities fraud charges accusing him of misleading investors in a tech start-up, including a state lawmaker, before he took office in January.

Paxton, a 52-year-old Republican, was fingerprinted and photographed at the Collin County jail while a throng of media waited outside. It was a frenzy reminiscent of a year ago when then Texas Governor Rick Perry - who was also still in office - was booked after being indicted on charges of abusing his power with a 2013 veto.

But whereas Perry defiantly welcomed the cameras within minutes of being processed at an Austin jail, Paxton ducked reporters while leaving the Collin County jail on bond. Paxton's attorney, Joe Kendall, issued a statement hours later in which he said Paxton will plead not guilty

and demand a jury trial.

"He is looking forward to the opportunity to tell his side of the story in the courtroom," said Kendall, adding that they were instructed by a judge to not comment further.