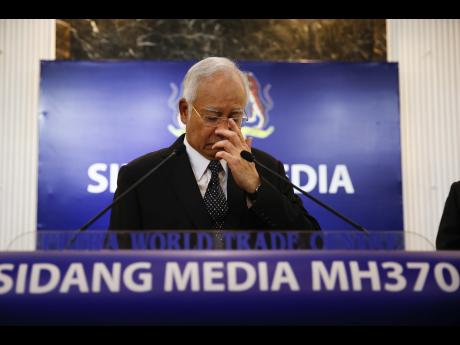 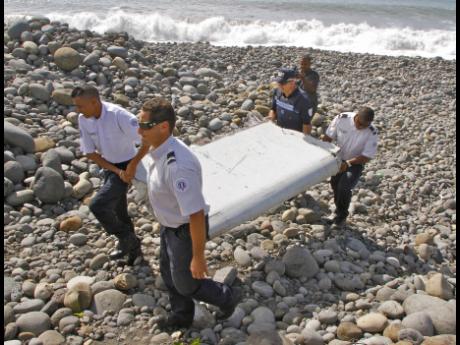 AP photo
In this July 29, 2015 file photo, French police officers carry a piece of debris from a plane in Saint-Andre, Reunion Island. If a wing fragment found in the western Indian Ocean turns out to be part of missing Flight 370, experts say, there are probably other pieces of the aircraft that floated off rather than sinking to the bottom of the ocean.
1
2

"It is with a very heavy heart that I must tell you that an international team of experts has conclusively confirmed that the aircraft debris ... is indeed MH370," Prime Minister Najib Razak told reporters.

The Boeing 777 jetliner disappeared 515 days ago on March 8 while on a flight from Kuala Lumpur to Beijing with 239 people on board. It is believed to have crashed in the Indian Ocean, but the reason remains one of aviation's biggest mysteries.

The first ever physical evidence of the aircraft was found on the French territory of Reunion Island in the Indian ocean, thousands of miles (kilometres) from the site near Australia where the plane is believed to have gone down.

"We now have physical evidence that, as I announced on 24th March last year, flight MH370 tragically ended in the southern Indian Ocean," Najib said.

"The burden and uncertainty faced by the families during this time has been unspeakable. It is my hope that this confirmation, however tragic and painful, will at least bring certainty to the families and loved ones of the 239 people onboard MH370. They have our deepest sympathy and prayers," he said.

Intact and encrusted with barnacles, the metal piece was sent to France for scrutiny by the French civil aviation investigation department known by its acronym BEA, and members from its Malaysian and Australian counterparts.

In a statement, Malaysia Airlines said the part of the plane's wing, known as a "flaperon," which was found on Reunion Island on July 29 had been confirmed to be of Flight 370.

"Family members of passengers and crew have already been informed and we extend our deepest sympathies to those affected," it said.

The statement said this "is indeed a major breakthrough for us in resolving the disappearance of MH370. We expect and hope that there would be more objects to be found which would be able to help resolve this mystery."

In addition to confirming the provenance of the 777 flap, analysts say the investigators will examine the metal with high-powered microscopes to gain insight into what caused the plane to go down.

It is also not known why the plane turned back from its original flight path and headed in an opposite direction before turning left and flying south over the Indian Ocean for hours.

Jackqita Gomes, the wife of crew member Patrick Gomes, said she was informed by Malaysia Airlines about the news half an hour before Najib's announcement.

"Now that they have confirmed it as MH370, I know my husband is no longer of this world but they just can't leave it with this one flaperon. We urge them to continue searching until they find the plane and bring it back," she said.

Gomes said she hopes to get her husband's body back so that the family can give him a proper burial and say goodbye.

She said she watched the announcement on TV with one of her daughters, while her youngest child, a 15-year-old son, was asleep.

"My son doesn't know yet that his dad is really gone, that he won't be back," she said, in tears. "I will have to tell him tomorrow before he goes to school."

Highly technical efforts to extrapolate the jet's final hours before it would have run out of fuel gave force to the theory that it went down somewhere in the southern Indian Ocean.

No one is certain why the plane deviated so far from its planned route.

Analysts have said a close look at the wing part could indicate what kind of stress the plane was under as it made impact. It won't fully solve the mystery of why the plane disappeared, nor will it help pinpoint where the plane crashed.

The Reunion Island debris would be consistent with the working theory that the jet went down in the Indian Ocean and the debris travelled with the ocean current which moves counter-clockwise.

Malaysian officials, who are leading the investigation into the plane's disappearance, have said the plane's movements were consistent with deliberate actions by someone on the plane, suggesting someone in the cockpit intentionally flew the aircraft off-course.

Since last year, Australian officials who are leading the search effort have operated on the theory that the plane flew on autopilot for hours before running out of fuel and crashing into the ocean.

Investigators settled on this scenario after analysing data exchanged between the plane and a satellite, which showed the plane took a straight path across the ocean.

Australian Transport Safety Bureau chief commissioner Martin Dolan said last year that investigators assume the autopilot would have to have been manually switched on, again suggesting that someone in the cockpit deliberately steered the plane off-course.

In defining the search area, the Australian Transport Safety Bureau also operated on the theory that the crew was unresponsive, possibly suffering from oxygen deprivation, as the plane flew on autopilot.

The agency said this was indicated by the loss of radio communications and a long period without any maneuvering of the plane, though it emphasized this was only a working theory and did not mean that accident investigators led by Malaysia would reach a similar conclusion.

A loss of cabin air pressure could cause oxygen deprivation, or hypoxia, which could make pilots unable to perform even basic tasks.

Some analysts argue that the apparent lack of damage to the piece of wreckage indicates a controlled landing on the ocean, with the jet sinking largely intact.

Another theory is that the jet plunged into the water vertically – high dive-style – snapping off both wings but preserving the fuselage.

Yet another possibility, supported by a flight simulator, is that an out-of-fuel Boeing 777 would belly-flop heavily tail-first, disintegrating on impact.