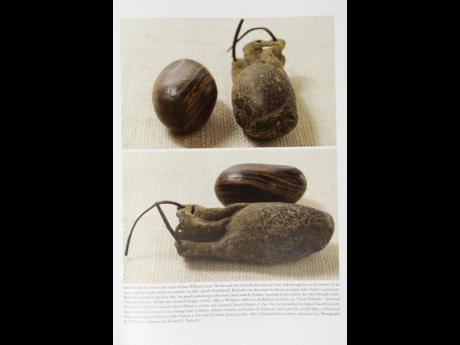 AP
Pictures of smooth, brown, egg-sized rocks are shown in the printer's manuscript of the Book of Mormon

The Mormon church's push towards transparency about its roots and beliefs took another step forward yesterday with the first published pictures of a small sacred stone it believes founder Joseph Smith used to help translate a story that became the basis of the religion.

The pictures of the smooth, brown, egg-sized rock are part of a new book that also contains photos of the first printer's manuscript of the Book of Mormon. Officials with The Church of Jesus Christ of Latter-day Saints unveiled the photos at a news conference in Salt Lake City.

The religion's drive in recent years to open its vaults and clarify sensitive beliefs is aimed at filling a void on the Internet for accurate information as curiosity and scrutiny increased as church membership tripled over the last three decades, Mormon scholars said.

The church's campaign seems aimed at preventing current members from leaving and showing non-Mormons that they aren't hiding anything, said Terryl Givens, professor of literature and religion and the James Bostwick chair of English at the University of Richmond.

"The other churches' origins are concealed by the mist of history," Givens said. "Mormonism is the first world religion in which the origins were exposed to public view, to documentation, to journalists and newspaper reporting."

The pictures in the new book show different angles of a stone that is dark brown with lighter brown swirls. The photos also show a weathered leather pouch where the stone was stored that is believed to have been made by one of Joseph Smith's wives, Emma Smith.

The church has always possessed the stone, which was transported across the country during Mormon pioneers' trek from Illinois to Utah in the mid-1800s, but it decided to publish the photos now to allow people who prefer visuals to words to better understand the religion's roots, said Richard Turley, assistant church historian. The stone will remain in the vault.