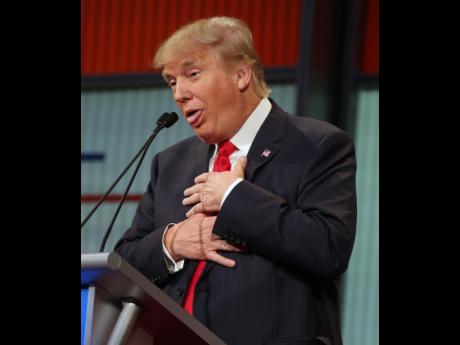 Donald Trump opened his mouth and found the door closed to him at a high-profile gathering of conservative activists.

His latest incendiary comment about one of the Fox News moderators from last Thursday's Republican presidential debate has led to a scolding by the party and condemnation by organisers of the RedState Gathering.

The billionaire businessman lashed out against Fox News' Megyn Kelly for her questions during the campaign's first debate. She had asked the candidate about his use of derogatory language toward women and whether it reflected the "temperament of a man we should elect as president".

"I just don't want someone on stage who gets a hostile question from a lady and his first inclination is to imply it was hormonal. It just was wrong," Erickson wrote on the RedState website.

He said that "while Mr Trump resonates with a lot of people with his bluntness, including me to a degree, there are just real lines of decency a person running for president should not cross".

Trump's campaign was incensed - and unbowed.

"This is just another example of weakness through being politically correct. For all of the people who were looking forward to Mr Trump coming, we will miss you. Blame Erick Erickson, your weak and pathetic leader," according to a campaign statement.

The Republican National Committee, treading carefully about the current front-runner for the party's 2016 nomination, called on Trump to "immediately clarify" his comment, and said it would be "highly inappropriate" if Trump stood by his remarks.

Trump needs "to understand that he is seeking the presidency of the United States now and that words do matter," RNC spokesman Sean Spicer told NBC's 'Today' show yesterday.

"I'm hoping that Mr Trump, because he does speak off the cuff, because he doesn't ascribe to political correctness, was speaking in a way that wasn't fully thought out," Spicer said.

Erickson said he had invited Fox's Kelly to attend in place of Trump in the evening.