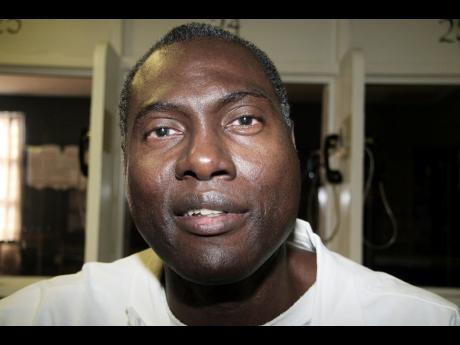 AP
In this December 11, 2012 file photo, Jerry Hartfield speaks from a visiting area at the Hughes Unit of the Texas Department of Criminal Justice outside Gatesville, Texas.

For more than 35 years, a Texas man has been in prison even though an appeals court threw out his conviction on a 1976 murder charge that initially had him on death row.

On Monday, 59-year-old Jerry Hartfield will return to court for a retrial, facing a life sentence if convicted of killing a woman who sold tickets at a Bay City bus station.

Prosecutors and defence lawyers have haggled over who's to blame for decades of inaction and whether Hartfield's right to a speedy trial have been violated. But the trial judge has refused to dismiss Hartfield's indictment and prosecutors recently took the death penalty off the table, citing a 2002 US Supreme Court ruling barring execution of mentally impaired people.

At a hearing Friday, a psychologist testified Hartfield's IQ is 67, below the threshold of 70 considered mental impairment.

"I don't hold no grudge," Hartfield told The Associated Press in 2012 from a Texas prison. "All I want to do is just get things right and get back on with my life again."

Hartfield was 21 in June 1977 when he was convicted of murdering Eunice Lowe, 55, a ticketing agent who was beaten with a pickaxe, stabbed with a glass soda bottle and robbed. She was raped after she was dead. Her car and nearly $3,000 were stolen in the September 1976 attack at the Bay City bus station, about 100 miles southwest of Houston.

It wasn't until 2006 that an inmate told Hartfield that because of the appellate court reversal, it appeared there was no sentence to commute. With the jailhouse lawyer's assistance, Hartfield, who said he learned to read and write in prison, filed a handwritten court writ demanding retrial or release.

The Court of Criminal Appeals rejected it twice. Hartfield took it to the federal courts where US District Judge Lynn Hughes agreed in 2009 there was no conviction.