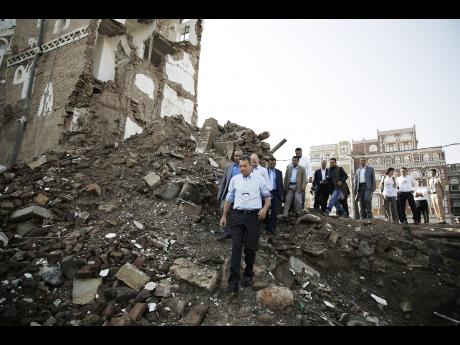 AP
Peter Maurer (centre), president of the International Committee of the Red Cross, walks near houses destroyed by a Saudi-led airstrike during his visiting to the old city of Sanaa, Yemen, yesterday.

The officials said the strike late Saturday hit the fighters on a coastal road as they headed towards the embattled city of Zinjibar in southern Yemen.

The Saudi-led, American-supported coalition began launching airstrikes in March against Shiite Houthi rebels and their allies, who control the capital and much of the country's north.

Five Emirati soldiers have been killed in battle since March.

Yemeni security officials have said that Saudi, Emirati, Egyptian and Jordanian military advisers are training hundreds of fighters at a military base near the port city of Aden.

All officials spoke on condition of anonymity because they were not authorised to speak to journalists.

Also yesterday, International Committee of the Red Cross (ICRC) President Peter Maurer said the organisation has committed to doubling its programme in the country to respond to the "catastrophic" situation.

"What the ICRC is doing and what the few other organisations are doing is by far not sufficient to cope with the dimensions of the humanitarian problem," Maurer said.

His comments came during a three-day visit to Yemen.