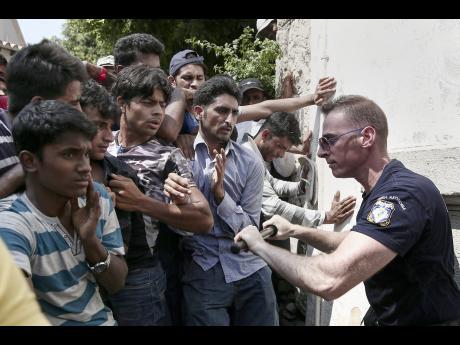 AP
A Greek policeman tries to hold migrants behind a fence as they wait for a registration procedure outside a police station at southeastern island of Kos, Greece,yesterday.

Greece's coast guard rescued more than 1,400 migrants near several Greek islands in the eastern Aegean Sea over the past three days as the pace of new arrivals increases, authorities said yesterday.

Tens of thousands of people, many of them fleeing conflict in Syria and Afghanistan, have been making their way from the Turkish coast to nearby Greek islands in inflatable dinghies, overwhelming cash-strapped and understaffed authorities on the islands. The vast majority then head to mainland Greece, and from there, try to reach more prosperous European Union countries by either walking across the Balkans from northern Greece or sneaking on to Italy-bound ferries from the west.

The 1,417 migrants rescued between Friday morning and yesterday morning were picked up at sea in 59 incidents off the coasts of the islands of Lesbos, Chios, Samos, Agathonisi, and Kos, the coast guard said.

Those figures do not include the hundreds of others who manage to reach the islands' coasts themselves, walking to the main towns to turn themselves in to local authorities and receive registration papers.

The increasing pace of arrivals comes on top of the roughly 124,000 migrants who reached the Greek islands by boat in the first seven months of 2015, a 750 per cent increase from the same period last year, according to UNHCR, the United Nations' refugee agency.