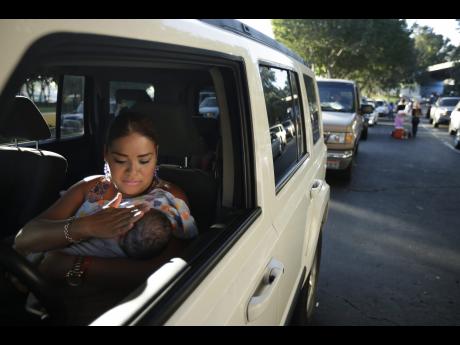 AP
In this 2014 file photo, Johann Rodriguez caresses her three-month-old son Lionel, as he falls asleep after nursing, while waiting in line at the Western Hemisphere’s busiest border crossing in Tijuana, Mexico.

Five immigrant mothers held in facilities with their children are seeking millions of dollars in damages from the United States (US) government for what they contend is psychological and physical harm as a result of being detained, according to court papers filed on Monday.

Andrew Free, a Nashville immigration lawyer representing the women, filed tort claims against the Department of Homeland Security, alleging the detained women and their children received inadequate medical care, suffered psychological trauma and, in some cases, were wrongfully imprisoned.

The tort claims, a precursor to a federal lawsuit, also target US Customs and Border Protection and US Immigration and Customs Enforcement (ICE). ICE oversees two family detention centres in South Texas and another in Pennsylvania that currently hold about 1,400 people.

The filing comes just days after the government fought a federal judge's ruling calling for the immediate release of children and their mothers from detention, saying it intends to turn the facilities into short-term processing centres and that limiting family detention could spark another surge in immigrants from Central America.

Tens of thousands of immigrant families, mostly from Central America, crossed the Rio Grande into the US last summer. Many have petitioned for asylum after fleeing gang and domestic violence back home.

ICE spokeswoman Gillian Christensen refused to comment on the pending litigation as a matter of policy. But she said the agency ensures that the centres operate in an "open environment" and are "an effective and humane alternative for maintaining family unity as families go through immigration proceedings or await return to their home countries".