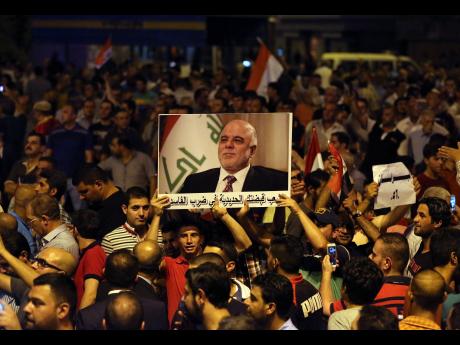 AP
Demonstrators chant in support of Iraqi Prime Minister Haider al-Abadi (in the poster) during a demonstration at Tahrir Square in Baghdad, Iraq.

Lawmakers approved the plan without a debate, a dramatic departure from the heated arguments and delays that have slowed previous efforts to approve important laws. Iraq's most revered Shiite cleric, Grand Ayatollah Ali al-Sistani, had backed the plan, which was announced Sunday amid mounting public pressure.

The government in Baghdad faces multiple challenges amid a war against the Islamic State group, which blitzed last year to capture a third of Iraq and neighbouring Syria. Iraqi forces and Kurdish fighters, backed by United States-led airstrikes, have since managed to retake some areas but clashes between the militants and security forces continue.

Yesterday's development came after mass protests across Iraq against corruption and poor governance, focused on frequent power outages which have made a recent heatwave even more unbearable.

After the parliament approved the law, Prime Minister Haider al-Abadi congratulated Iraqis in a message on his Facebook page, promising "to continue in the path of the reform, even if it costs me my life, with the trust in God and the people's support".

Parliament speaker Salim al-Jabouri said he hoped that yesterday's "move will be the first, and not the last, to continue in the path of reform with the same spirit and without any hesitation".

The United Nations mission to Iraq, known as UNAMI, welcomed the plan, saying it will "strengthen national unity and accelerate reconciliation at a time all honest Iraqis need to combine their efforts in the fight against terror".