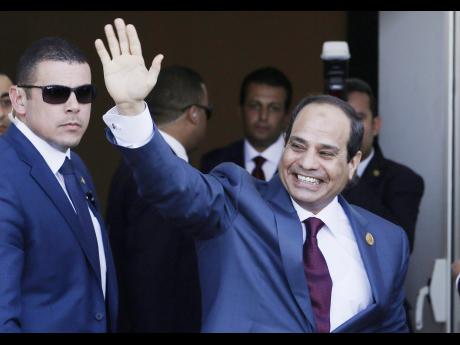 AP
Egyptian President Abdel-Fattah el-Sissi waves as he arrives to the opening ceremony of the new section of the Suez Canal in Ismailia, Egypt. A new 54-article anti-terrorism bill signed into law by el-Sissi was announced yesterday.

Authorities claim the measures will halt attacks by Islamic militants and stop the spread of their ideology, but the new restrictions have prompted concern from rights groups and even some politicians and senior judges.

The 54-article bill, signed into law Sunday night by President Abdel-Fattah el-Sissi, sketches out an extremely broad definition of terrorism, describing it in one article as any act that disturbs public order with force. Some charges, such as leading or organising a terrorist group, carry the death penalty.

The law also prescribes stiff jail sentences for a range of crimes, including promoting or encouraging any "terrorist offence," as well as damaging state institutions or infrastructure, such as military or government buildings, courthouses, power and gas lines as well as archaeological sites.

Egyptians lived under so-called "emergency laws" for decades that gave police sweeping powers, encouraging a culture of excess and brutality among security forces, something that partially inspired the 2011 uprising against longtime autocrat Hosni Mubarak. The law was suspended after his overthrow.