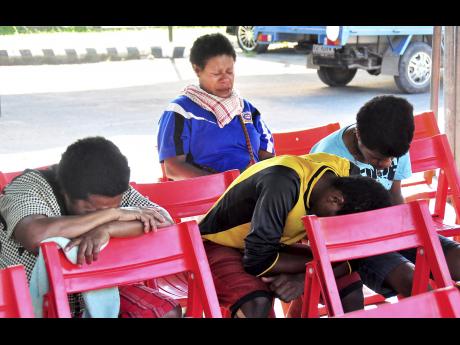 AP
Relatives of passengers on the missing Trigana Air Service flight sit at Sentani airport in Jayapura, Papua province, Indonesia, yesterday. Rescue officials spotted an Indonesian airliner that went missing on Sunday in the country’s mountainous easternmost province of Papua, and rescue teams were preparing to try to reach the crash site by air and foot.

An airplane with 54 people on board that crashed in the mountains of eastern Indonesia was carrying nearly half a million dollars in government cash for poor families to help offset a spike in fuel prices, an official said yesterday.

Smouldering wreckage of the Trigana Air Service turboprop plane was spotted from the air yesterday morning in a rugged area of the easternmost province of Papua, rescue officials said. There was no immediate word of any survivors from Sunday's crash, which happened in bad weather.

Four postal workers aboard the plane were escorting four bags of cash totalling $468,750 in government fuel aid, Franciscus Haryono, the head of the post office in Jayapura, the provincial capital, told The Associated Press.

The ATR42-300 twin turboprop plane was flying from Jayapura to the city of Oksibil when it lost contact. Transportation Ministry spokesman Julius Barata said there was no indication that the pilot had made a distress call.

The cash from the Social Affairs Ministry was to be distributed among poor people in remote areas to cushion the jump in fuel costs, Haryono said.