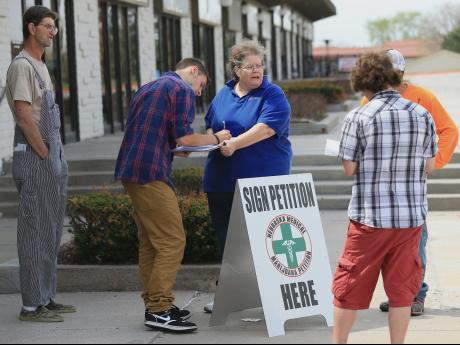 AP
Activist Maggie Graham (right) collects signatures in Omaha, Nebraska, for a petition to place medical marijuana on the ballot. Medical marijuana will return to the Nebraska Legislature’s agenda next year, but advocates who want it legalised are raising money and lining up donors now for a possible ballot measure in 2016.

Nearly a year after the state's six medical-marijuana dispensaries opened, patients are changing their habits.

For quick relief, they are smoking marijuana less and inhaling its vapours and therapeutic oils more, those in the industry say. Others are eating cookies or placing strips with the various active ingredients into their mouths to alleviate pain, nausea and seizures associated with the growing list of ailments.

Prices that a year ago were markedly more expensive than the underground market have dropped sharply and are now competitive, according to dispensaries, state officials and market analysts.

"When I started having success, I took the oil," said William McDonald, 42, of Monroe, referring to CBD extract, which does not induce a high.

McDonald has had cancer as well as complications from a 2008 bite of a brown recluse spider that included a staph infection and heart failure.

His daily regimen starts with a strip of marijuana oil under his tongue first thing in the morning. He will inhale the vapours of a Cannabis Sativa strain during the day to elevate his mood, then the Cannabis Indica strain to relax and help bring on sleep in the evening.

"I was giving up because none of the medicine was working," McDonald said, noting marijuana has helped him. "My depression stopped," he said. "My anxiety about death has stopped."

Angela D'Amico, owner of the Compassionate Care of Connecticut dispensary in Bethel, said the shift away from smoking is the result of a widening array of treatment options.

"The absorption is that much greater when you vaporise rather than burn with a match, with the puff of a joint or smoking a pipe," D'Amico said.

A pharmacist at the dispensary recommends treatment depending on the patient's condition.

Cancer patients vaporise marijuana with high percentages of THC, the psychoactive ingredient in the plant, for quick relief of the nausea that accompanies motherapy.