Trump: Deny citizenship to babies of people illegally in US 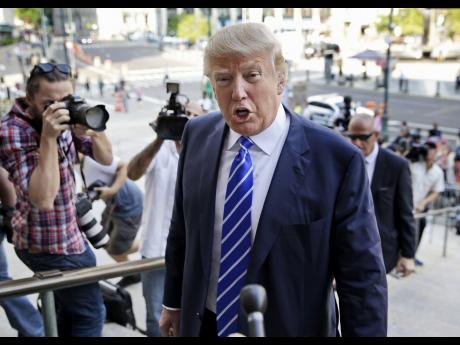 AP
Donald Trump arrives for jury duty in New York yesterday. Trump was due to report for jury duty Monday in Manhattan. The front-runner said last week before a rally in New Hampshire that he would willingly take a break from the campaign trail to answer the summons.

Republican presidential candidate Donald Trump wants to deny citizenship to the babies of immigrants living in the United States (US) illegally, as part of an immigration plan that emphasises border security and deportation for millions.

He would also rescind Obama-administration executive orders on immigration.

Trump described his expanded vision of how to secure American borders during a wide-ranging interview Sunday on NBC's Meet The Press, saying he would push to end the constitutionally protected citizenship rights of children of any family living illegally inside the US.

"They have to go," Trump said, adding: "What they're doing, they're having a baby. And then, all of a sudden, nobody knows ... the baby's here."

Native-born children of immigrants, even those living illegally in the US, have been automatically considered American citizens since the adoption of the 14th Amendment of the Constitution in 1868.

The odds of repealing the amendment's citizenship clause would be steep, requiring the votes of two-thirds of both houses of Congress and support from three-fourths of the nation's state legislatures. Republicans in Congress have repeatedly failed since 2011 to pass bills aimed at ending 'birthright citizenship'. Some conservatives believe the granting of citizenship in such cases could be changed without amending the Constitution.

"They're illegal," Trump said, describing native-born children of people living illegally in the US. "You either have a country or not."

Trump's remarks came as his campaign website posted his programme for "immigration reform". Among its details: Making Mexico pay for a permanent border wall. Mandatory deportation of all "criminal aliens". Tripling the force of immigration officers by eliminating tax-credit payments to immigrant families residing illegally in the US.