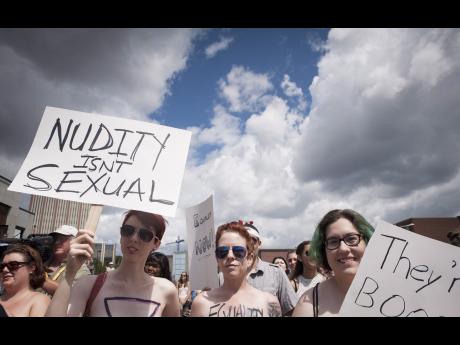 Hannah Yoon
'Bare With Us' demonstrators gather at the Waterloo Town Square in Waterloo, Ontario, Canada on August 1

Hundreds of women prepared to brave yesterday's brisk winds and the risk of arrest by going topless in a downtown Minneapolis park, a gathering meant to say: If men can do it, why can't we?

The event in Gold Medal Park yesterday afternoon is part of the national 'Go Topless Day' meant to show that women should have the same right as men to bare their skin. Organiser Faith Neumann told the Star Tribune more than 2,000 people plan to attend and she expects 500 women to take their tops off in unison.

"As long as men are allowed to be topless in public, women should have the same constitutional right," the event's Facebook page says. "It is time for women to achieve the same rights."

Neumann says it's also a way for women to feel comfortable with themselves and around others. Men were encouraged to come donning bikini tops or bras.

"A lot of women will be there who have never done this, and some who have done this in other states," said Neumann, 24.

"It's going to boil down to what we're faced with at the time," he said.

A staff member for the event is charged with bailing out any arrested attendees, Neumann said. Children were not welcome, as it would mean legal trouble for indecent exposure to minors.

A similar event was planned in Alexandria, Minn., as well as New York and Los Angeles and other cities.