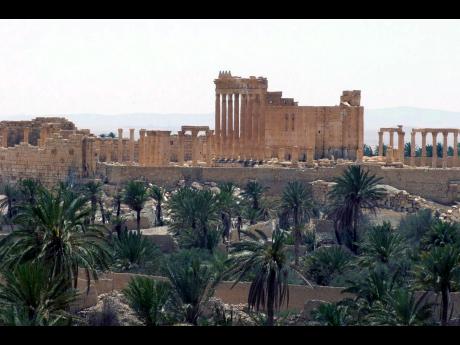 An ancient temple in the Syrian town of Palmyra was reduced to rubble by Islamic State militants, a witness said yesterday, confirming the complete destruction of the ancient monument in what UNESCO said was a "war crime".

The United Nations cultural agency called the destruction of the temple, part of a sprawling Roman-era complex that was once among the most popular tourist sites in the Middle East, an "immense loss for the Syrian people and for humanity".

Kishore Rao, director of the UNESCO World Heritage Centre, said the ancient oasis city of Palmyra sat at a crossroad between the Roman empire, Persia, China and India, and that its soaring architecture was a "masterpiece of human creative genius".

"The destruction of any part of it is equally deplorable," Rao told The Associated Press.

Activists outside Palmyra reported the demolition of the Temple of Baalshamin late Sunday, but there were conflicting accounts of the timing and the extent of the destruction.

The witness, who goes by the name Nasser al-Thaer, said the bombing took place Sunday shortly after 4 p.m. The militants had lined the inner and outer walls of the temple with small bottles of explosives more than a month ago, he said.

"I went to see it, not from very close because IS (militants) were there and because I was worried for myself and afraid they will ask what are you doing here. So I saw it from a distance," al-Thaer told the AP.

"It is rocks on the ground; nothing more," he said.

He said he feared other ancient sites in Palmyra might be next, but that no explosives had been placed around them.

An IS operative confirmed the temple was destroyed and said a statement would be issued soon. He spoke to the AP over Skype on condition of anonymity because members of the group are not allowed to speak to media.