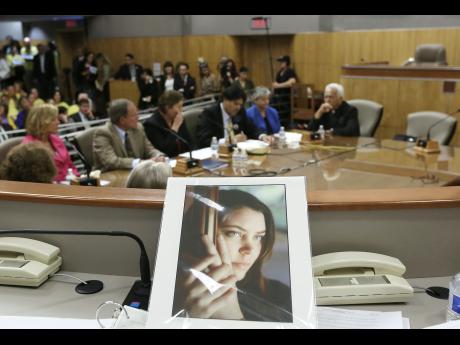 Rich Pedroncelli
A portrait of Brittany Maynard sits on the dias of the Senate Health Committee at the Capitol in Sacramento, Calif., as lawmakers took testimony on proposed legislation allowing doctors to prescribe life ending medication to terminally ill patients.

A national right-to-die group was fined $30,000 yesterday for assisting in a Minnesota woman's suicide in 2007.

Final Exit Network Inc was convicted in May of assisting the suicide of Doreen Dunn, 57, of Apple Valley, who lived with chronic pain for a decade before she took her own life. The group was also convicted of interfering with a death scene, but was not fined on that charge.

Dakota County District Judge Christian Wilton also ordered Final Exit Network to pay nearly $3,000 in restitution to Dunn's family to cover funeral expenses. But he declined to order the 15 years of probation sought by prosecutors to restrain the group from involvement in other suicides in the state.

Robert Rivas, an attorney for the group, said it would pay the fine this week but plans to appeal. He told the judge that Final Exit Network is unrepentant, and that the court set a precedent by making speech a crime in Minnesota.

Dunn's husband, Mark Dunn, asked the judge to consider the family's grief at finding out that her death was actually a suicide, after years of believing she died of natural causes.

"When this organisation acted as they did, they raised themselves above the law. By their deception they have shown a calculated, cruel disregard. Then, with an arrogance that is breathtaking, they posture themselves as compassionate, while at the same time they argue technicalities of law to obscure and avoid their responsibility," Dunn said.